As a foodie and a Certified Cicerone the opening of a new Gastropub gets me about as giddy as a sci-fi geek hearing that Joss Whedon is working on a new show. However, since these craft beer slinging, epic eateries are popping up faster than a Lindsay Lohan relapse, I tend to be slightly apprehensive about getting too excited before visiting these potential honey holes.

In the last year or so, within my immediate review radius, there have been several new taverns, pubs, lounges, saloons, and bars that opened their doors promising true craft beer with epicurean eats, only to leave this Blue Collar Foodie, wanting and melancholy. Some of them fell short on delivering genuine craft beer, offering a plethora of Anheuser-Busch InBev owned brands masquerading as bona fide craft, while others advertised high-end pub fare, but instead offered dishes that were basically frozen chicken fingers with a side of Sriracha mayonnaise. Then there were one or two that hit the food and drink notes like a trained vocalist yet failed to stick the dismount, due to their décor, customer service, and douchey clientele.  If I believed in bad reviews, I would insert the names of theses asshat asylums, but I don’t, so I won’t, but you will know them as soon as you walk through the door.

I know what some of you are thinking. WTF, man, you are being uncharacteristically critical, and leaving douche droppings all over the internets. You must understand, that my high expectations for a gastropub stems from the fact that I live within 3 miles of one of the best craft beer and food emporiums in the North Jersey region, and therefore, I hold all establishments to the standard that is The Twisted Elm, in Elmwood Park.

Enter, the new kid on the block, and I am not talking about Donny and Joey, I am talking about the Garden State Ale House, located at 340 Paterson Ave., in East Rutherford, NJ. When I say new, I don’t mean opened two months ago either, I mean like opened on December 28th, new.

As a rule, I normally don’t visit an establishment during their first month of operation, because I have worked in the restaurant industry before, and I completely understand it takes a while to work out the kinks. With that said, this joint is within walking distance of my friend’s apartment and we decided to break my tenet and check it out on opening day.

I was not going to write this review to be honest, because I expected a general shit-show, which is to be expected from a restaurant that is literally minutes old.  However, The Garden State Ale House, spoiler alert, fucking nailed it so hard, I felt I was doing my readers a disservice by not spewing these glowing words all over the interwebs.

Look, it is all shiny and new.

As we entered, a smiling hostess greeted us, and seated us almost immediately, even though the dining room was quite crowded. The excellent customer service continued, when Christian arrived at our table with the food, beer, wine, and cocktail menus. Since, they just opened their doors and it was obvious that we had not been to Garden State Ale House in the past, Christian took the time to explain each menu, and informed us that if we had any questions to flag him down.

The beer menu was solid, offering a wide selection of not only exceptional brands, but varied styles as well. Of course, the menu was IPA heavy, but that is to be expected, because ‘merica. However, Stouts, Porters, and Saisons could be found as well, which is always a bonus. For those of you that have friends or fathers that feel that hops, barley, water, and yeast should taste like, well, water, they got you covered too, with a few not so craft beers that will wet their whistle.

We ordered our beers and began to peruse the food menu. Although, I like my gastropubs to push the epicurean envelope and deliver a diverse menu, full of  an assortment of cuisines, I actually judge them first on their burger. I feel that this item embodies what a gastropub should be, and is the perfect vessel to express the chef’s creativity and flavor. Therefore, I immediately flipped to the burger section, and began the decision making process.

Normally, it takes quite a bit of time for me to choose the perfect burger to test the wherewithal of the cooking staff, but not on this occasion. The Garden State Ale House literally must have been thinking of me, and my kin, when they created the prodigious Das Burger. Described as an 8oz, 100% certified Angus Beef burger, topped with fried Gouda, fried egg, bacon, Taylor ham, a jumbo onion ring, and chipotle mayonnaise. Holy hell, I could feel my arteries constricting, and I fucking loved it.

My comrades also made their choices rather quickly and we flagged down Christian to place our order. Kat went with the Pickle & Horseradish Steak wrap, Buro decided to join me on my burger adventure with the Blazin’ Cajun Burger, Steph rocked the Adult Grilled Cheese, and Alex chose the Guinness Stew. Since we were all damn near starving we also ordered the Taste of Thanksgiving and the Smokin’ Calamari for the table. 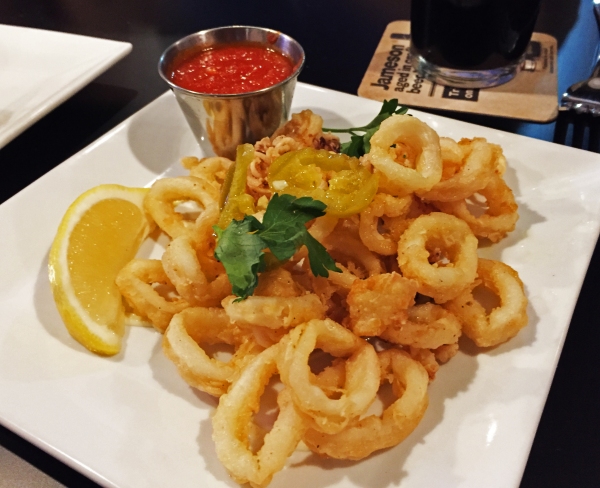 The appetizers arrived shortly after we ordered them, and they not only smelled fantastic but they also looked appealing, which is a testament to the kitchen staff’s attention to detail. The Smokin’ Calamari was described as lightly battered fried calamari, sauteed with hot peppers, served with a citrus aioli and marinara sauce. The calamari itself was prepared extraordinarily well, and the spicy flavor of the hot peppers was present, but not overbearing. My only critique of this dish was it was missing the citrus aioli, but the marinara was flavorful enough to make up for this minor infraction. 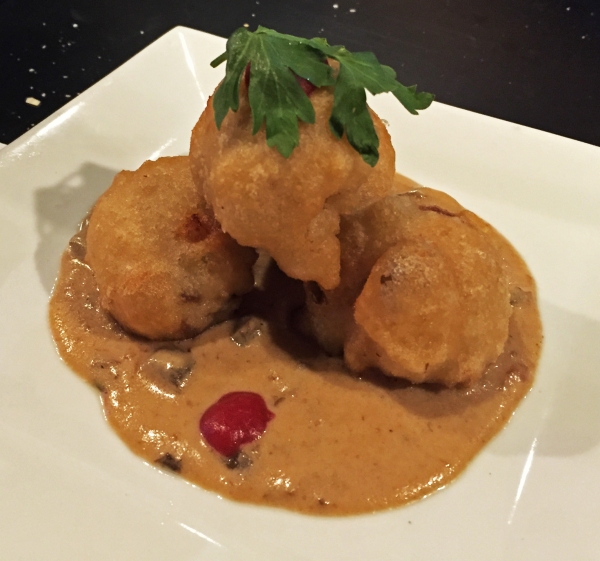 The Definition of Amazeballs.

Since Thanksgiving is my favorite holiday, and the food that is served on this highest of holy days, is in my opinion, foodgasmic, I am cautious when ordering menu items that attempt to summon their essence. But, when dining with a crowd, democracy rules, so I went with it. All hail democracy friends! These fried spheres of turkey, stuffing, and mashed potatoes were nothing short of amazeballs. I mean it; they were literally balls of amaze! When you bring your ass to this spot, and after reading this article, why wouldn’t you, do yourself a favor and put these in your food hole. 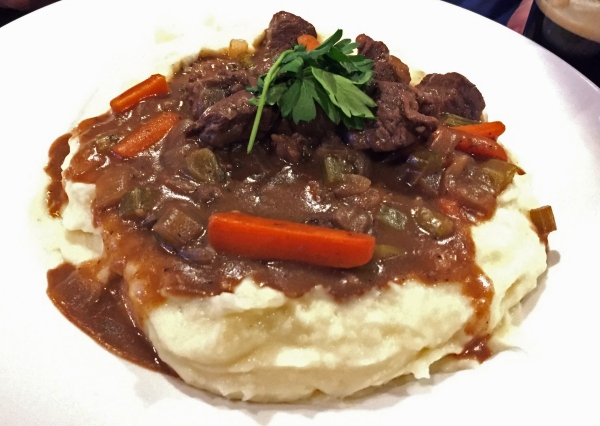 Before, I wax poetic about my legendary burger, I will touch on the entrees that my cohorts chose. Firstly, Alex’s Guinness Stew, which was described as a hearty stew with generous chunks of tenderloin steak, slowly cooked in Guinness, finished with Jameson Irish Whiskey, served over mashed potatoes. This dish was rich and hearty as advertised, complete with an excellent robust flavor. The gravy, was the star of this meal, and I could not help but dip a nice chunk of bread in the ooey, gooey deliciousness when Alex tapped out, and I was not disappointed at all.  The portion size of the entree was concerning at first, but each item that comprised this meal was so sturdy that it was more than enough to feed an average eater.

As a spice fiend, when restaurants describe things as “Spicy,” “Ultra Hot,” or in this case “Blazin’,” I expect a weak, half-assed, attempt at tantalizing my taste buds. I almost always have to add hot sauce just to get the dish to an acceptable level of heat. This was not the case at The Garden State Ale House. After the first bite, Buro began to sweat, and with a smile on his face he housed the whole burger. This burger was not all about heat though, it was the perfect melody of burgery deliciousness, bready awesomeness, and  jalapeño fierceness.  If you are a fan of flavor, this could very well be your go to order when you visit.

We all grew up eating Grilled Cheese, at least we should have. If you didn’t, I call your parent’s parenting into question, but that is a topic for some other blog, maybe called TheBlueCollarBabyMaker.Com.  This grilled cheese, however, was not your grandma’s Wonder Bread and processed cheese sandwich. This son of a bitch is two slices of Texas toast crammed with cheddar, pepper-jack, and smoked gouda, served with house chips and tomato fondue. I am all for nostalgia, but you can’t tell me that this sandwich doesn’t crap all over your G-ma’s bullshit ass Grilled Oil on GMOS! I was impressed with the melding of the three cheeses and this dish was exactly what I would want an adult grilled cheese to taste like. Unfortunately, it was delivered to the table without the tomato fondue, which would have brought this meal to whole other level. We chocked this faux pas up to an opening day oops and I will order this again to see how the tomato soup adds to this already impressive sandwich.

Since it was a Monday, Kat was trying to be somewhat healthy, so she went with the Pickle Horseradish Steak Wrap with a side of Cole slaw. This wrap was full of chopped steak, smoked Gouda, hot cherry peppers, hot pepper brined pickles, baby arugula, sliced tomatoes, red onion, and horseradish honey mustard. Although there appears to be a surplus of ingredients joining the party within this wrap, they all play very nicely with each other. No one piece of the puzzle overshadowed the other and thus complemented one another quite well. For a healthier option, I feel like this dish was a resounding success, and Kat seemed to be happy with her selection. 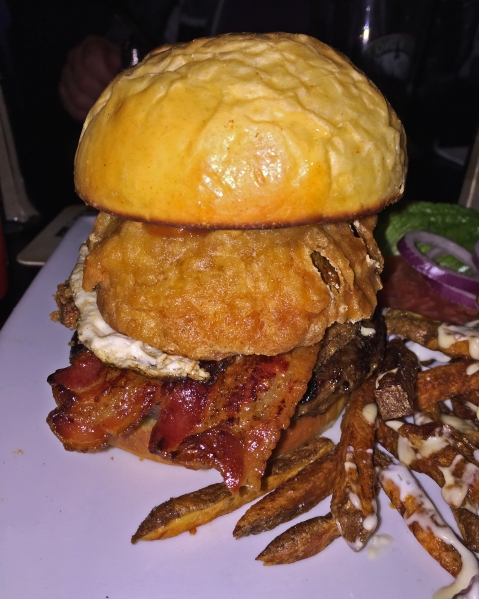 Untimely death be damned, I fucking love this burger!

Now for the pièce de résistance, the magnum opus, the crowning achievement of the evening. THE DAS BURGER! First off, I ordered this beast at Medium Rare, and it arrived expertly cooked. I  was slightly nervous that I would not be able to fit this monstrous slab of yummy in my mouth, but with a little squishing, and cutting it in half, I was able to take the perfect first bite. As, angelic music was playing in my head, I chewed that first bite, savoring each and every second this amalgamation of salty, spicy, and meaty was frolicking with my taste buds. Lucky for me, after swallowing that first lovely mouthful, TWSS, there was so much more burger to be had, not to mention the pile of BACON, RANCH, CHEESE FRIES! 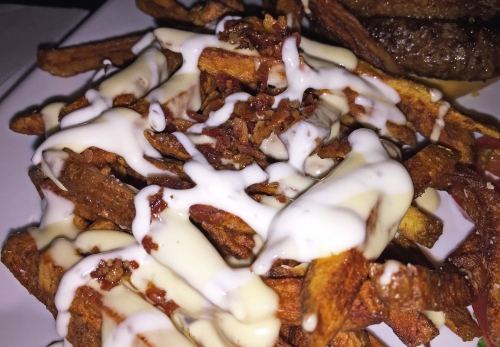 Look at that beautiful pile of cholesterol and death!

You know there is no way I couldn’t mention the Bacon, Fucking, Ranch, Fucking, Cheese Fries. I mean come on dude, look at that beautiful pile of cholesterol and death! As good as the fries were, the superstar of this plate was definitely the burger. It was juicy to the last bite, the bun held up, and I have to confess it was the first burger, in a long time, that almost defeated me. I had to force the last flavorful tidbit of super tasty burger in my mouth, but it was a labor of love people.

Every element of the Garden State Ale House seemed like it was painstakingly taken into consideration. The décor, the placement of the televisions, and even the tables themselves seemed like an interior designer was hired to construct the prefect atmosphere to enjoy the food and drink they serve. Furthermore, the beer selection was on point, delivering the perfect blend of high-end Cicerone approved rarity and approachable brews for general consumption. All in all, The Garden State Ale House, was extremely well received by the motley crew that I rolled in with and that is high praise, especially on their first night open. In the immortal words of the Terminator, “I’ll be back!”