The Evolution Of Morris Tap & Grill

Most restaurateurs and Chefs are content with resting on their laurels and patting themselves on the back about past successes. They use their meteoric rise in the foodie subculture as an excuse to become soft and complacent. These actions cause most of them to quickly fall from the pedestal they have placed themselves on and return back to the middle of the pack as they are replaced by hungry young culinary minds, eager to prove their worth.

Luckily for the New Jersey food scene, Chef Eric Levine has never been this kind of Chef. Since the beginning of his career, he has knocked down one barrier after another, barely pausing to bask in the greatness of his accomplishment.

Chef Eric traveled the world gathering culinary techniques at every turn. He worked in France, Italy, and Japan at world-renowned restaurants alongside of highly acclaimed Chefs before returning to his hometown of New York City to become Chef de Cuisine at the famed Marriott Marquis in New York City.

Was this enough for Chef Eric? Nope! Chef Eric continued to take the restaurant world by storm collecting accolades like Justin Bieber accumulates haters. In 2011, Chef Eric appeared on Food Network’s Chopped and his personality and talent left the competition on the chopping block, as he was declared the champion.

This illustrious victory was parlayed into the opening of Morris Tap & Grill located at 500 Route 10 in Randolph, NJ. Chef Eric busted into the New Jersey Restaurant scene with reckless abandon offering an innovative menu paired with a beer list that could make a Cicerone weep.

Still not satiated, this gastronomic juggernaut refused to take his foot off the pedal. As Morris Tap & Grill was creating a name for itself in the Pantheon of New Jersey eateries, Chef Eric and #TeamKickAss opened up Paragon Tap & Table located at 77 Central Avenue in Clark, NJ.

One would think that operating two of New Jersey’s top restaurants would earn Chef Eric a reason to sit back, relax, and watch his hard work simply flourish. If this is your thought, you apparently don’t know Mr. Levine.

Instead of allowing his establishments to become stale in the ever-so finicky restaurant market, Chef Eric immersed himself in his passion once again and decided to unveil a new menu at his flagship restaurant Morris Tap & Grill.

Last week, Kat and I were fortunate enough to be invited to Morris Tap as Chef Eric’s guests amongst several other writers, bloggers, and foodies to taste the exciting offerings that will populate the new menu, which is only one aspect of the evolution of Morris Tap & Grill. 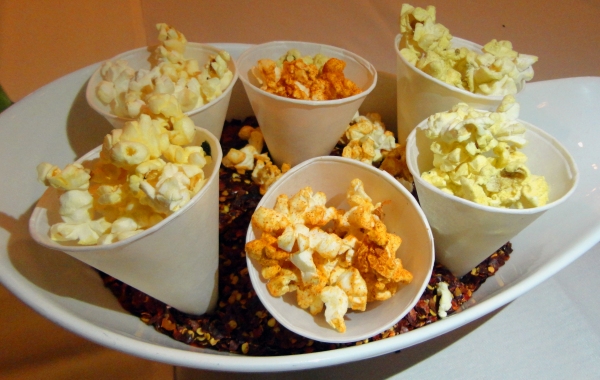 The first course we were introduced to was the Trio of Popcorn appetizer that featured three unique and fun flavors that are not usually associated with this movie theater staple. Barbecue, Wasabi, and Truffle Butter seasoning topped the perfectly popped kernels of corn that made Orville Redenbacher’s old school offerings taste like stale matzo. This casual yet witty preparation breathed new life into a forgotten dish, creating a boldly flavored appetizer ideal for the barroom hero that has refined his palate since shotgunning PBRs in a college dorm room.

As I was daydreaming of Magnitude from Community reciting his famous line, “Pop! Pop!” about the trio, Chef Eric hit us with the second course of the night, a tempura fried broccoli and asparagus platter paired with crispy carrot shavings and a scallion ginger dipping sauce.

I will dream of these carrot shavings and it might not be the driest dream I have ever had.

I am not usually one to rock appetizers, but this dish very well may convert me. The tempura battered veggies were light, crunchy, and flavorful, and when combined with the dipping sauce, it created a party in my mouth. However, the true star of this plate was the deep fried carrot tidbits that flawlessly walked the line between salty and sweet. Not only was this dish enormously tasty due to the fact that it was mostly comprised of vegetables, it made me feel like I was trying to eat healthy.

Up next was the Smoked Shrimp paired with a Fennel salad topped with a garlic pesto dressing. Chef Eric informed us that the new menu is littered with items that will be prepared via the in-house smoker that will be cranking at damn near full tilt around the clock.

When most people think about smoked dishes, images of heavy, sauce-laden entrees like ribs, brisket, and pork shoulder immediately come to mind. As we discussed earlier, Chef Eric is not like most people, and therefore, this avant-garde offering was a welcome change to this thought process.

I thoroughly enjoyed the delicate smoke flavor that was imparted on the shrimp that was finished on the grill. Furthermore, the fennel topped with a pesto garlic sauce, which boasted a hint of chili oil, was a flawless and healthy substitute for the traditional pasta that would be served with a dish like this.

If this expertly prepared Shrimp was not enough to solidify our opinion on Chef Eric’s seafood skill, the next course dropped the hammer. The next offering was Seared Scallops served on top of a Corn Risotto. Separately these components were magical, but when married together, each forkful was simply divine. The buttery scallops combined with the creamy risotto were a better match than Zack Morris and Kelly Kapowski.

At this point in the tasting, my cohorts and I were feeling as if we were a Thanksgiving Turkey in the 1960’s…Stuffed! Some of us were even thinking about waiving the white towel and tapping out, that is until the next dish hit our tables. A beautifully presented braised oxtail entrée that was served on an herb crostini paired with a chorizo sausage and poblano cream topped corn pudding. 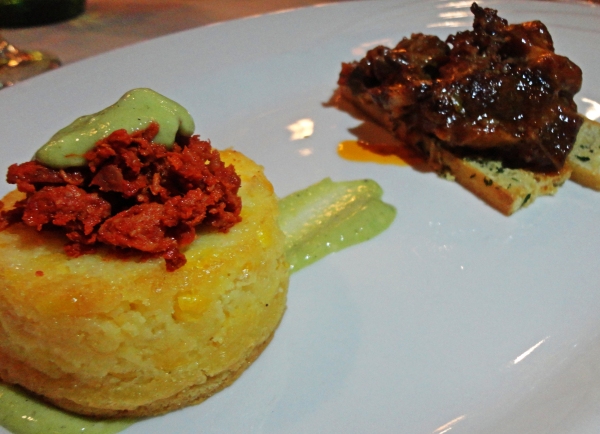 I could marry this dish!

This was by far my favorite meal of the night! The Oxtail was prepared in the traditional fashion, which allows the fatty nature of the meat to deliver an immense flavor and a wonderful texture. I was under the impression that after shoveling a few pieces of the oxtail into my craw, nothing was going to compete with the amount of happy my taste-buds were experiencing, but then I tried the corn pudding and chorizo tag team, which conveyed a spicy, sweet juxtaposition that was delightful.

This dish could be my Mistress. Shhhhh… don’t tell the Oxtail!

Just when I thought Chef Eric could not top the previous meal, the House Cured Pork Belly and Tomatillo Salad was brought to the party. When reviewing my notes for this dish, I noticed that I wrote three words that I still feel describes this dish flawlessly, “Holy Hot Damn!” This was Kat’s favorite, and I can see why. The tomatillo salad was exquisitely spicy and the House Cured Pork Belly was nothing short of perfection.

So sweet and yummy!

The crew at Morris Tap & Grill wowed us all with their innovative, fun, and playful new culinary creations that would soon grace their everyday lineup all night, and just when we thought we were done, dessert was served. A Caramel Trio concoction composed of caramel chocolate mousse, caramel cake, and a chocolate bar topped with dulce de leche and a play on a traditional Mirepoix, served as a Dessert, featuring carrot cake, fig onion marmalade, and a lichee sorbet hit the table. Although both desserts were great, I am a sucker for chocolate and caramel and therefore this dish reigned supreme in the dessert round! 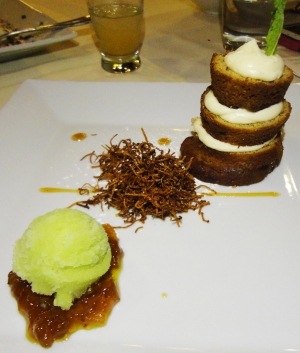 Go ahead you can look up WTF a Mirepoix is… I had to.

Regulars at Morris Tap & Grill should refrain from mourning the death of the classic dishes they have grown to love over the years. Chef Eric ensured us that these new menu items would not replace the crowd-pleasing fare that Morris Tappers have been enjoying since the restaurants inception. However, I implore each and every one of you to give these contemporary meals a whirl next time you decide to visit MT&G. Just please don’t take my reservation!