Being a foodie is not just about stuffing your face with the latest food trends, posting pictures on Instagram, and writing copious amounts of Yelp reviews, blog posts, and comments. A true foodie should always be on the lookout for epicurean adventures that transcend basic consumption and craft a memorable experience.

I am not talking about Medieval Times or the Renaissance Faire either. Not that eating a giant turkey leg wrapped in bacon, chugging a beer from a leather skin, and saying “Ye’ old” all day is not a fantastic freakin’ time, but I don’t consider them to be food centric. These types of attractions tend to focus almost exclusively on the spectacle of the affair, and therefore, the food is merely an afterthought.

I am referring to the type of gastronomic experience that begins as a seed in a talented Chef’s mind and blossoms into an edible journey unlike any other. One such experience can be found at Morris Tap & Grill, located at 500 NJ-10, Randolph, NJ. This magnificent foodie find is the brain child of Chef Eric LeVine, and is known as the Kitchen Bar.

Kat and I were recently invited to join Chef Eric, literally in the kitchen, of Morris Tap & Grill for a meal that we would not soon forget. If you have ever worked in the food service business, you are aware of the chaotic rush that occurs behind those dangerous swinging doors that act like sentinels for the kitchen. For those of you that have never had the opportunity to don an apron, memorize the specials, and get a 2% tip from a jerk in a Jaguar, your table is waiting at Morris Tap and Grill.

I have to admit, it has been a while since I was behind the scenes at a restaurant, so I was extremely excited to be in the thick of it once again. Not to mention, I knew that Chef Eric and his team of culinary wunderkinds were going to drop a foodtastic bomb on us unlike any other, and that just added to my enthusiasm.

As we entered the restaurant we were escorted to the kitchen where a private table for two was set overlooking Chef Eric’s pristine kitchen. We were seated at once and handed drink menus that showcased the impressive beer selection that I have come to love and expect from Morris Tap & Grill. While perusing the effervescent offerings, our waitress introduced herself and placed a basket of homemade seven dust chips on our table complete with a dipping sauce.

She’s Crafty and just my type!!!

After a brief discussion about the rare gems that littered the beer menu we placed our drink orders with our server who was extremely knowledgeable about the extensive beer list. Upon finishing the order I apologized for asking so many questions. Our server informed me and wanted me to inform you that they enjoy conversing about the libation menu at the Morris Tap and would rather you choose the right drink to pair with your meal, than choose the wrong one and have a bad experience.  Cheers to that!

Crispy fried slices of fantastic wonder, covered in the seven spices that fall from the sky in nirvana.

We then turned our attention to the basket of Seven Dust Chips which are leaps and bounds above any loaf of bread that you receive at most restaurants. Bursting with flavor, these crispy-fried-slices-of-fantastic wonder tasted even better when dredged in the chipotle dipping sauce that made my mouth happier than a crooked politician in New Jersey.

As we were enjoying the first of many courses that we would see that night, Chef Eric arrived at our table and welcomed us to his Kitchen. He confirmed that Kat and I don’t have any food allergies or any aversion to specific types of food. After we verified that we would eat just about anything that he could possibly place in front us, we began talking about that evening’s agenda and beyond.

The Kitchen Bar experience is unlike your normal dinner out on the town. Chef Eric contacts you via email and discusses the menu with you before your reservation. Although, you won’t know exactly what you are having, which is half the fun, the Chef will create a meal that is specifically designed for you and your group. The only catch is that the whole table has to commit to the same meal prior to your arrival. In other words, if you choose to bring a vegetarian, Chef Eric will create a vegetarian meal that will convert most carnivores, but all of you will get no meat. 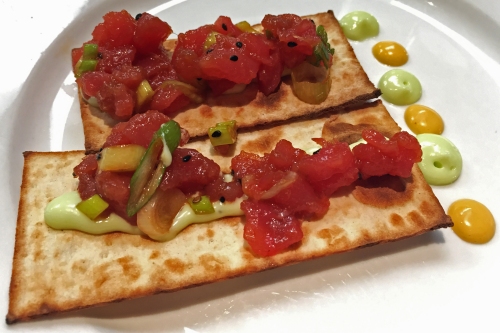 Sushi ain’t got nothing on this perfect summer dish!

While members of the staff danced around the kitchen as if Fred Astaire himself created the choreography, Kat and I watched intently as Chef Eric was diligently working on our next course.   The Chef plated and delivered a beautiful and remarkably flavorful Tuna Tartare Flatbread dish.   The peaceful tuna tossed in a slightly tumultuous Ginger Scallion Sauce served with a downright boisterous Wasabi Mayo created a dish with levels of depth that made the Grand Canyon look like a Hāngi Hole.  Chef Eric and the staff allowed Kat and I to enjoy each course before removing the plates from our table and starting to prepare the next. As we savored each bite of the Tuna, we listened to the clamoring of the kitchen, complete with a soundtrack of orders being barked, food being prepped, and pans rattling. 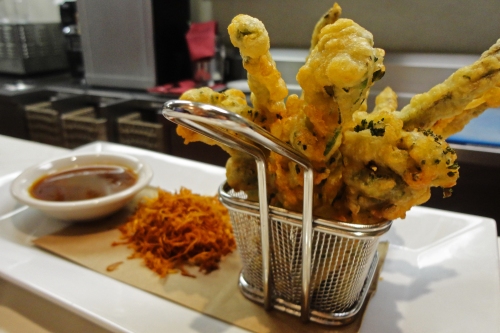 Ohhhh Crispy Carrot Threads You My Only Friend!

Shortly after we were done with the Tartare, Chef Eric once again delivered a plate to our table. This time we were gifted with a Tempura Battered & Lightly Fried Asparagus & Broccolini served with Crispy Carrot Threads and a Soy Scallion Ginger Sauce. This dish is bar none of our favorites at Morris Tap, and we were very happy to see it. The true star of the this dish are the Crispy Carrot threads, which according to Chef Eric, not a lot of people even eat because they think they are a garnish. If you do ever find yourself at Morris Tap & Grill, even in the normal dining room, do yourself a favor, order this app, and promise me you will eat the whole damn thing!

While we were demolishing the tempura dish, Chef Eric began to work on our next course, and he said it was a special one. Kat and I were both filled with intrigue and wonder as he prepared the dish merely feet away from us. We were trying to peer over his shoulder and use all of our senses to make an educated guess on what our next gastronomic dish could be. We channeled everything we ever learned from watching Where in the World is Carmen Sandiego and we were only able to decipher that he was prepping raviolis of some sort. Unfortunately, the exact variety was still a mystery.

The Ravioli Revolution will not be televised, so I will be sure to Blog the hell out of it.

However, the moment the plate hit the table, I instantly knew that these stunning stuffed pockets of pasta were none other than Chef Eric LeVine’s world renowned Lobster Ravioli. Not only do these ravioli house an extremely generous portion of actual lobster meat, they are topped with a Chipotle Shallot Shrimp Sauce that boasts more shrimp than George Constanza could eat in a two hour long meeting.

If you don’t order this you should go directly to the Jerk Store!

As we relished in the sheer awesomeness of this course, Chef Eric discussed his most recent project, Chef Eric’s Ravioli Revolution. Although this revolution will not be televised, it will bring these glorious pasta pouches, as well as other varieties to grocery stores all across New Jersey and, hopefully, the country. In other words, on the nights you can’t get to the one of Chef Eric’s bad ass eateries, you can still enjoy these marvelous morsels. 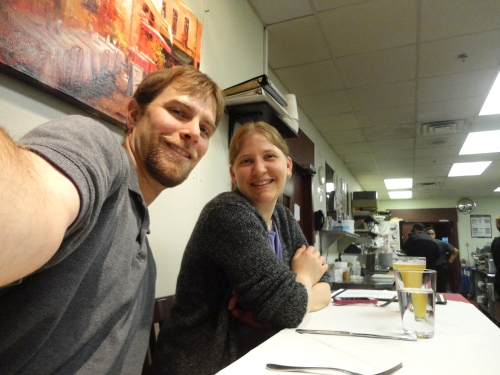 Excuse me while I take a Selfie!!!

Even though Kat and I were approaching the food wall, we could not let any of those luxurious raviolis go to waste. Chef Eric and his staff recognized our dilemma and automatically decelerated the pace of our meal. This reduction allowed us to interact with the kitchen staff a little, and Chef Eric took this opportunity to introduce to us the key players that keep the kitchen running like a well-oiled machine and allow him to bounce around from Paragon Tap & Table to Morris Tap & Grill like an errant beer pong ball. 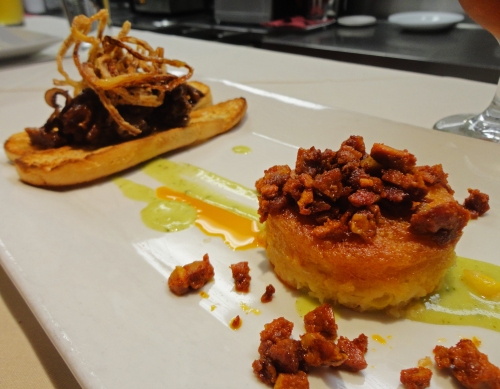 After some brief introductions and a much needed hiatus from the conveyor belt of yummy, we were ready to jump back into the ring and see what else Chef Eric had in store for our feast. Next to arrive was the House Made Chorizo on Corn Pudding paired with Smoked Oxtail which is served on Herb Crostini. Although the oxtail was expertly prepared and was melt in your mouth tender, the show stopper on this plate was the corn pudding paired with the Chorizo. The spicy kick of the chorizo balances the sweetness of the corn pudding creates a combination that is straight up perfection. Not to mention it is almost as gorgeous as my wife.   Relax, I said almost!

Our appetites were once again satiated, but as soon as the next course hit our table, we were instantaneously hungry. One of the main reasons that Kat and I do not own a pig is because we love pork to damn much to give it up, so when this pork tenderloin dish was served I knew it did not have a chance. To make its chances of survival worse it was paired with risotto, which happens to be another weakness of ours, because I make Risotto like Joffrey from Game of Thrones makes friends…Spoiler Alert… Poorly! 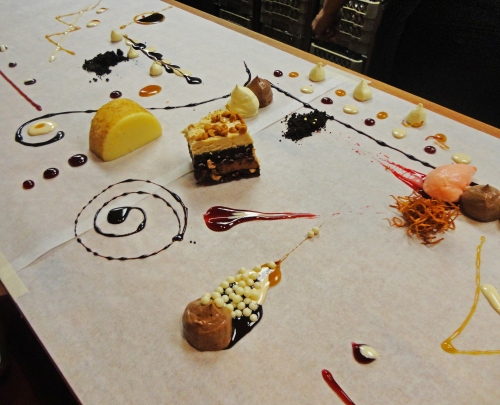 The Kitchen Bar experience includes a dessert unlike any other in the world. That is because it is created while you watch while Chef Eric himself and no two are ever quite the same. It is the perfect way to finish this unique foodie voyage that breaks down the fourth wall of the restaurant business for all to see. 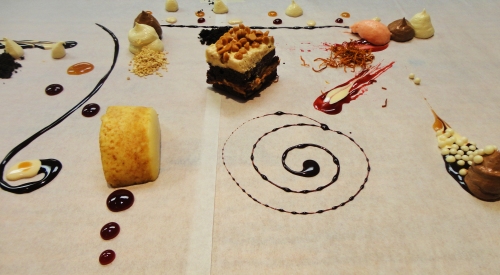 Chef Eric has deemed this distinctive dessert, The Dessert Scape, and it is created on your table top from various syrups, cakes, toppings, and candies. As with actual artwork, pictures just don’t do it justice.   Watching it being constructed might be half the fun, but the temptation to eat it before it is finished is stronger than the Schwartz that is contained within Yogurt.

Ohhh Myspace angles, you can even make dessert look better.

The wait however is well worth it; because once this masterpiece was completed, eating it was as rewarding as sneaking a selfie at the Sistine Chapel.  Each sauce dollop and syrup smear, when combined with the pastries that were strewn about the table, created a new and exciting forkful of amazeballs. Although I was slightly sad to destroy Chef Eric’s craftsmanship, I did not feel bad enough to stop eating every last bite of his sweet-sweet sculpture of yummy.

Chef Eric LeVine could build a fortress with all of his accolades and from this stronghold watch as his multitude of projects prosper. However, that is simply not how Chef Eric LeVine rolls. He is one of the hardest working Chefs in the business, and is constantly looking to cultivate innovative and exciting business ventures. In other words, Chef Eric LeVine only has one speed, and that speed is Ludicrous Speed!