I am what some people might label a food snob. Although, we prefer to be called Foodies, Epicureans, and Gastronauts, I have accepted that there are individuals that see my chosen perspective on food to be mildly pretentious. To be honest, I am sure those D-bags in Fedoras, fashion glasses, and tight jeans would rather not be called hipsters, but if the ironically worn croc fits…

As with any personality quirk that some people perceive to be annoying, once you accept it and embrace it as part of how you are, it seems to grow exponentially; hence the unequivocally maddening progression of the selfie.

My growing love affair with the foodie realm has an unfortunate price though, and that price is my increasing abhorrence for the gastronomically challenged grub that is served at almost every chain restaurant in the good ol’ U.S. of A. I know what you are thinking, “Mr. Blue Collar Foodie that does not seem like a problem at all.” It may not seem like an issue at first glance, but there are two reasons being on this epicurean soap box which is teetering on the fence of smugness is not the best place to be.

The first issue is most of your friends enjoy restaurants such as The Olive Garden, T.G.I.Fridays, Chili’s, and all the other flair wearing, slop slinging, chains that litter the highways, and therefore you tend to alienate yourself from the group by shunning these establishments. Secondly, no one likes a hypocrite, and I don’t care how much of a foodie you claim to be on your website, blog, Facebook, Twitter, and Instagram page, every single one of us have a weakness. It may be a Big Mac, a Whopper, a Crunchwrap Supreme, or a 7-11 Taquito, but every now and again that craving hits and until it is satisfied, that Duck Confit Cannoli tastes bland and ordinary.

My edible Achilles Heel comes in the form of an infamous fast food hamburger so gastronomically filthy that by merely writing this sentence I could be thrown out of the League of Extraordinary Eaters for life. (That club does not exist, but it does now! Hit me up to Join!)

To paraphrase A Clockwork Orange , “And the thing that always flashes into my gulliver is that I’d like to have one, right down there on the floor, the old In-N-Out, real savage.” That is right; my foodie transgression is none other than an Animal Style Double-Double from In-N-Out Burger. Unfortunately, not only is In-N-Out a chain restaurant and dining there could get me black balled from every farm-to-table this side of Pennsylvania, the closest In-N-Out is in freaking Texas! So even if I decided to give in when the hankering hits, I am shit out of luck, and my only recourse is to visit one of the many east coast clones that fail to compare to MY PRECIOUS!!!  That is until NOW! 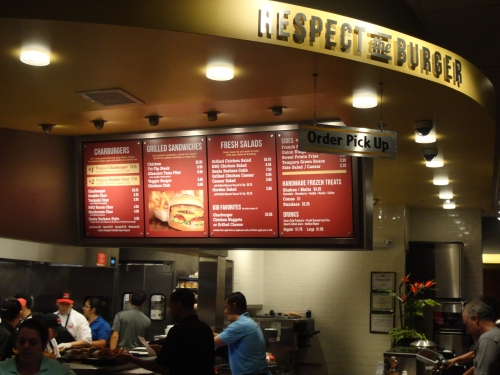 The Habit Burger Grill, another California based burger chain, just fell from the heavens and landed smack dab in my hometown! The address for this new burger joint is 3101 Promenade Blvd. in Fair Lawn, NJ 07410. When it first arrived, I have to admit it; I believed it to be just another trend following fast food chain serving sub-par, salty meat pucks to the masses one stale bun at a time. I honestly did not give them a second thought.   That is until the buzz began. Slowly but surely like the well-deserved hatred for Ray Rice that swept over America, a phrase was being uttered in Bergen County. A phrase that once bounced off my ear drums, made this uninformed Habit Hater enter the newly constructed burger spot and literally eat my words.

What was the phrase you ask? It was very simple but insanely incendiary, “Habit may very well be better than In-N-Out.” This sentence echoed in my head, rattled around like a bouncy ball in an elevator before snuggly resting in my frontal lobe. I pass by The Habit Burger Grill twice each day, and every time I drove past this utterance reverberated once again. Until one night I made the executive decision that Kat and I would visit The Habit for dinner.

Eventhough quite a few people with appetites that I trust were talking up Habit, I still had my reservations. In my eyes, comparing a burger to my Double-Double is like comparing a common man to Jesus Christ, or a comedian to Robin Williams, you don’t do these things lightly. However, as Kat and I entered The Habit Burger Grill, the wafting smell began to seduce us. It did not smell of grease and fat. There was actually a scent of grilling meat that permeated the air. Furthermore, the set up of the restaurant had a familiar Californian feel, with an open kitchen and simplistic yet diverse menu hovering above the cashiers.

I felt it was somewhat busy for a Monday night, but that will happen when a new restaurant comes to town. Even though the line was decently long, the staff handeled it with ease and kept us moving at a brisk pace. When it was our turn to order, Kat and I decided to try what The Habit Burger Grill was most famous for, their Char Burgers. Our thought was basically if we like their original creation then we will have an excuse to come back and try their other offerings such as the BBQ Bacon Char Burger, Teriyaki Char Burger, Veggie Burger, or Fresh Albacore Tuna Sandwhich. 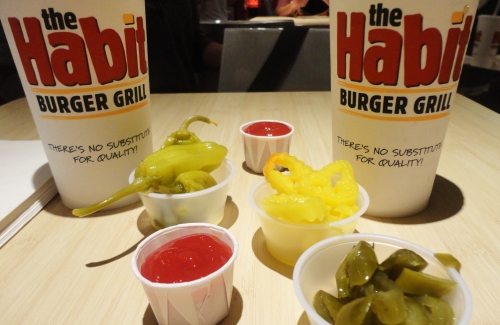 I ordered a Double Char Burger with a side of Onion Rings whereas Kat decided to go a little smaller. She ordered the single Char Burger with the Californian flair of avacado and a side of Tempura Green Beans. You heard that right, Fresh Cut Green Beans, lightly battered and flash fried at a Fast Food Burger Joint. While waiting for our food to be made fresh to order, we grabbed a table, filled up our drinks, and visted the Fixins bar. The Habit offers various hot peppers and numerous different dipping sauces that we helped ourselves to while we awaited our meals. 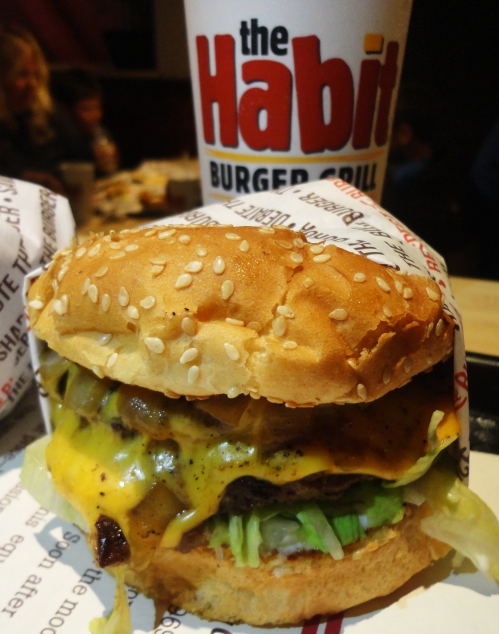 When our buzzer, well, buzzed, we approached the counter and gathered our food. It was the moment of truth for The Habit Burger Grill in this foodies’ eyes. I quickly snapped a bunch of photos to utilize for this post and then without hesitation grabbed my Double Char and chowed down. My friends, it was love at first bite. In my head, the act of chewing on this sandwhich played out like a cheesey romance movie, where the couple runs in slow motion towards each other for their first embrace. The Mayonnaise, pickle, and carmelized onions joined forces with the melty cheese and expertly prepared burger patty to create a burger that was equal, if not better than the crack-cocaine that is my In-N-Out Double Double. 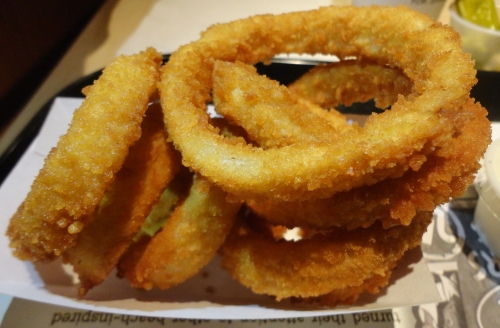 After almost demolishing my entire Double Char before even trying the sides we ordered, I was able to gain control of myself and put the burger down for a moment. My first stop was the capital city of Onlandia, the Onion Rings. They were battered and fried quite well and came with a ranch dipping sauce that paired nicely. The best part of these fried wonders were the onions that were choosen to be used. I believe it was a sweet onion, it may have been a Vidalia, but whatever it was, it was chock full of yummy goodness. 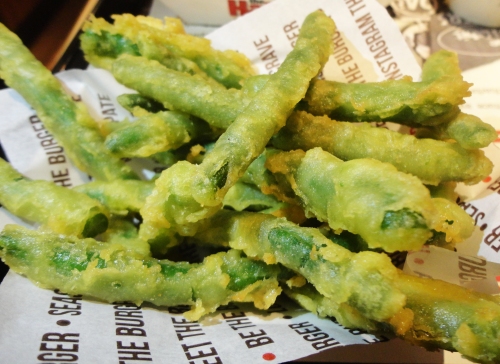 As per usual, my lovely wife was extremely generous and allowed me to sample her Tempura Green Beans.   Not only are these a healthier option than the sterotypical fries and onion rings that usually accompany a fast food burger, they were extremely flavorful as well. Furthermore, they only got better when dipped into the the Ranch sauce that I mentioned earlier.

Once our meal was resting ever so nicely in our bellies awaiting its eventual digestion, Kat and I began to discuss how The Habit Burger Grill faired. We both enjoyed the hell out of the Burgers and appreciated the variety of sides that could be ordered to compliment it. The fixins bar is always a plus, because you can, as the Defecting Monarch Of Burgers says, Have it your way. We also respected the history behind The Habit, which started out as a small endeavor by two brothers with big dreams. 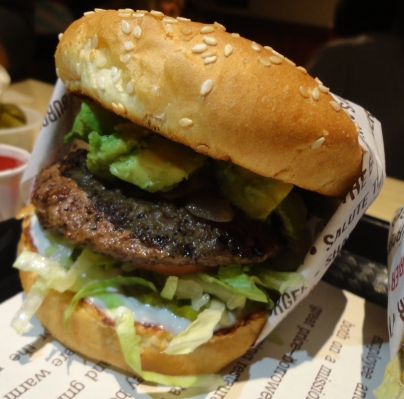 When everything was said and done, we left The Habit Burger Grill happy and full. As for the burger and how it compares to my clandestine long distance love affair with the Double-Double. I give the Char Burger the highest praise I can bestow on a fast food burger, it is different than yet equal to my beloved In-N-Out, and I assure you, there is not enough Michelin Stars in this world that will ever bypass that endorsement.   RESPECT THE BURGER INDEED!