As I press onward through this daft adventure called life, I find my palate is slowly getting more and more discerning.   I am further compounding this issue by actively endeavoring to hone it like a Shun blade in a feeble attempt to become a better foodie.  Due to my hobby, turned unpaid part-time job, I feel it is my duty to be able to dissect a dish mentally, and pick out even the subtlest of flavors.  This process has consumed me.  With every article I write, dish I cook, beer I sip, and plate I eat I fall farther down the rabbit hole, and I have now realized that I can get out.

Like a naked picture of your grandma that you find stashed in the attic in your grandfather’s army foot locker.  There are things you can’t un-see… or in my situation un-taste.   Since I started this blog I have sought out the best tasting food and drink that I could find, and as an unfortunate by-product my brain, belly, and taste buds have all united against me.  They not only crave this inspiring flavor, but they damn well expect it.

I no longer can rock a gas station taco and chug an Old E 64, before suiting up to play a baseball game in the hot July sun.  Call it getting old, call it selling out, or call it becoming refined, I have lost my love for almost as many foods as I have found over these years.

However, there is one particular food item I will never turn back on, no matter how much foie gras and Farmhouse Ale I consume.  Usually, and lovingly described as lips and ass stuffed inside the small intestine of a completely different animal.  This description should, but hardly ever does, scares anyone away.  I am of course speaking of the pride of American cuisine, the mother F’in HOT DOG!

Now, if you grew up in New Jersey, specifically the Bergen or Passaic County area, you know that the Hot Dog business is serious business.  Debates, arguments, even fisticuffs, have been known to break out at bars throughout this region when the topic of who makes the best dog is brought up.  I myself, am a Rutt’s Hut nut, but I appreciate all the old school joints; Johnny and Hanges, River View East, The Hot Grill, The Fireplace, Jimmy Buff’s, Hot Dog Johnny’s, etc.

With that said, when a new hot dog establishment sets up shop in my neck of the woods, I begin to salivate like one of Pavlov’s puppies.  My imagination begins to run wild, pondering the possibility of finding my new favorite dog.  Will they fry them, boil them, or grill them.  Will the cover them with chili and cheese, or will the dog bark for itself.  The prospects are seemingly endless; which leads to a fixation, that becomes a hankering, which turns into a craving, and finally manifests itself as an obsession! 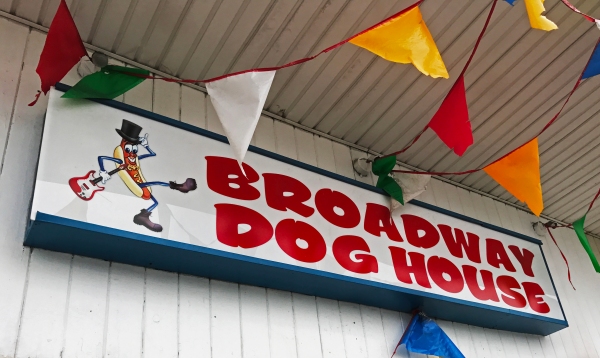 Welcome To The Dog House

As if my beer soaked cerebral cortex was following the Fight Club Penguin’s wacky ass recommendation, my mania caused me to slide into a momentary lapse of Hot Dog dementia. I rode this metaphorical pork fat laden slip and slide all the way to Broadway Dog House, located at 27-03 Broadway, in Fair Lawn, New Jersey. 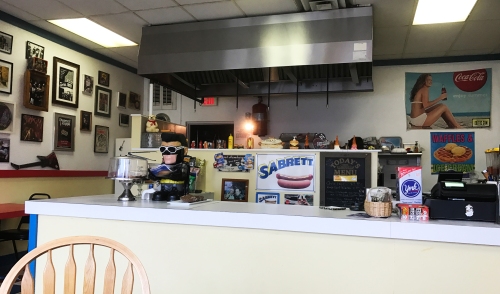 Can I take your order?

From the moment I walked into Broadway Dog House, I knew I was going to love it.  Memories of all the hot dog joints that I traveled to in the past gently washed over me.  The smell of the fryaltor alone was enough to conjure warm fuzzy recollections of Texas sauce, family meals, homemade relish, and long Sunday drives.  In short, if Broadway Dog House was on Tinder, I would swipe to the right so hard and fast that the app itself would file a restraining order on their behalf.

As I mentioned earlier, my roots are at Rutt’s, so I tend to favor dogs that have been bathed enthusiastically in sweet-sweet glistenin’ oil, as the lord intended.  Luckily for me, this is an option at Broadway Dog House.  However, unlike the old school joints that tend to treat boiled and fried like the dark side and the light side of the force, Broadway Dog House is all about the compromise.  Meaning, that since my heathen of a wife is not on team fried goodness, she was able to order her hot dog cooked in the more traditional, albeit wrong way.

Normally, the first time visiting and establishment like this, I would keep my order very simple because I want to taste the dog itself.  If an establishment uses sub-par pups, I am out.  However, as I was pondering my order, one specific menu item grabbed my attention and when it was my turn to order I opened my mouth and there was nothing I could do but speak its name… The Deep Fried Bacon Dog!  Kat followed the ordinary plan and requested a basic hot dog, but opted to add Broadway Dog House’s secret sauce instead of her usual ketchup.  We also ordered a Chili Cheese Dog, cooked heretic style, so Kat and I could share it.

Look at that sweet-sweet beautiful bastard!

In true Hot Dog joint form, our order was ready in no time and we were able to dive into our dogs.  Listen, I fully understand I am an easy mark.  I am like a wide-eyed Wisconsinite walking through downtown Paris near the Eiffel Tower, when it comes down to this particular fare.  With that said, because I love this shit so much, I know a good dog when I bite into one, and this my friends is a good damn dog!

Let’s discuss why, shall we.  A strong hot dog is like a solid house, it all starts with the foundation.  In the Hot Dog world that means good bread equals a good start.  Broadway Dog House apparently knows this decree, and have chosen the perfect bun to house their delicious meat stick.  The bun cannot be too large or the purveyor risks detracting from the flavor of the dog.  It can’t be too small either or the weight of the dog and the toppings could compromise the bun’s structural integrity leading to what we in the business call a dog-gone tragedy.   Alright, no one calls it that, but I really love puns, so freaking deal with it!

Working from the ground up, the next stop on this Hot Dog train of knowledge, is the Hot Dog itself.  NOT ALL HOT DOGS ARE CREATED EQUALLY!  Depending on how the dog will be prepared and what style you are going for, the choice of the dog is some pretty important shit.  Since Broadway Dog House rocks two distinct styles they had to choose their dogs wisely, and once again they excelled in this category.  The dogs were packed with flavor and even the one that was not fried had a solid snap to it when bit into.

The final element that must be discussed when constructing this illustrious snack is of course, the toppings.  This is where the magic happens people.  Assuming that one has heeded the aforementioned caveats, we should now have the perfect canvas to create a glorious meat monument.  If a structurally sound, fresh bun seamlessly snuggling a high quality, properly cooked, Hot Dog, doesn’t arouse your inner Bob Ross, you may very well be dead inside.  Whether, you are a simple Ketchup or Mustard type like Kat, or a balls-out topping fiend like me, there is something quite enjoyable about the customization of this amazing treat.

I digress… My diatribe about the perfect pup may be coming to an end, but I still have a bit to say about the Dog House on Broadway.  I did not confirm my suspicions and I don’t want to accused by our president for being fake news; but I believe Broadway Dog House actually uses two different brands of hot dogs in an attempt to achieve hot dog nirvana.  One for frying and one for the ones that are cooked wrong.

Even when they are cooked wrong they taste right!

I, of course had to steal a bite of Kat’s before she finished it and I was glad that I did.  The secret sauce is very similar to Big Mac sauce, just fresher, and I assume without the crack-cocaine that is obviously put in all the food served at McDonald’s.  I will admit the hot dog itself was pretty damn tasty, I mean I am still on team Deep Fry, but I no longer despise those who are not.  I don’t mean to be hyperbolic, but I think this Hot Dog might have saved our marriage!  Okay, of course, I mean to be hyperbolic, I am a writer, that is what we do. 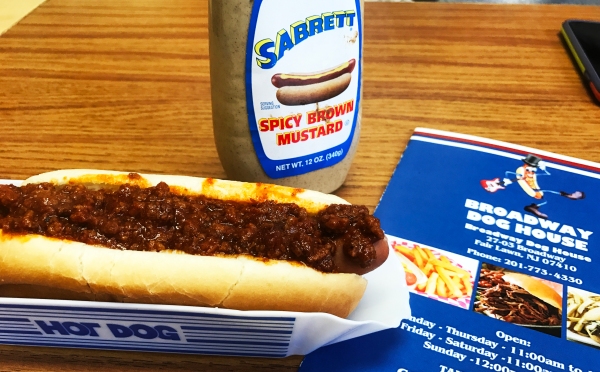 As for the Chili Dog, I usually don’t cheat on my true love, the Texas Dog, with its meatier more voluptuous cousin, but as they say, chunky sauces need lovin’ too.  The key to a good Chili Dog is simple, respectable chili.  It appears that Broadway Dog House grasps this basic concept because they did not just spoon some Hormel on top of their artfully prepared Hot Dog.  It seems they are using what I believe to be homemade Chili, or at the very least a high quality knock off.

Broadway Dog House sells other things than hot dogs of course.  Sliders, sandwiches, and traditional sides are a few of these items, and I am sure I will eventually eat them all.  However, one thing is for damn sure, every time I walk through their door I will be ordering at least one, DEEP FRIED DOG!  In my opinion, Broadway Dog House is a serious contender in the battle royal that the New Jersey Hot Dog scene is, and from my perception, always been.