If I were to create a hierarchy of things that make this Blue Collar Foodie smile wider than the Cheshire Cat on Molly, food would be damn near at the apex of this mountain of amazeballs and competition would not be too far behind.  Relax, my wife, my family, the Sunday Sippers, my furry babies, and all that other sappy crap are on that short list too, but this is a food blog and not the Hallmark Channel so how about we focus on the first two and try not to catch the feels.

We all know I love food, and shit you do too if you are reading this inane excuse to stare at food porn, but I feel I should explain my need, no my desire to compete.  I am a recovering jock and I go to meetings, in the form of playing all sorts of sports that is, about once a week for 10 months out of the year.  However, my sickness goes much deeper, I will debate a topic at a bar that I don’t even care about, shit, sometimes I will take the side of an argument that I oppose simply to see if I can win.  It is also not rare at all that a night of drinking ends in a push-up contest, race, or some cockamamie made up game.  During one particular relapse, I created a game called dreidel wars and battled my friends for hours, and I am quite ashamed about how intense our “game” got.  Let’s just say that Kat has banned D-Dub during the holiday season.

Normally my food obsession and my aspiration to compete have to take turns controlling my easily distracted frontal lobe.  That is until my favorite secret adventurous eating society, the Gastronauts, teamed up with the remarkable game designers at Interactive Escapes to create a no holds barred food focused Scavenger Hunt.

Yes, I understand that since I used a hyperlink to point you in the direction of the “Secret Adventurous Eating Society,” I am a member of, it means that this particular group is not as secret as I may have led you to believe.  However, it sounds so much cooler to be a member of a secret society, I mean I can place a link to the Freemasons here, it does not mean that they don’t control the world of finance, and I could link to Scientology as well.   I won’t because I ain’t trying to be on that list, that list gets you murked.  Those bitches be crazy.  Can’t you guys just let me have this one?  No?  Fine, I hate you internets, I truly do.

Now that you have crushed my dreams, I guess I can move on to discussing the epic scavenger hunt Kat, our friend Alex, and I participated in on Saturday November 5, 2016 in Jackson Heights, NY.  First off, I think I would do you guys a disservice to explain each and every aspect of this highly interactive adventure that was cooked up by the ingenious minds of the dynamic duo, that I have deemed the Gastro Game Gangstas A.K.A. Curtiss and Prescott.

When we arrived at the arranged meeting place we were divided into teams and informed that we all had a rougher night than Hillary on November 8th.  Apparently, we all attended a bachelor party celebration and we not only lost our wallets but we lost our dignity as well.  The good news was the MTA found our wallets, however the bad news was we lost The Groom!!!  (Cue overly dramatic music and fake gasp!) 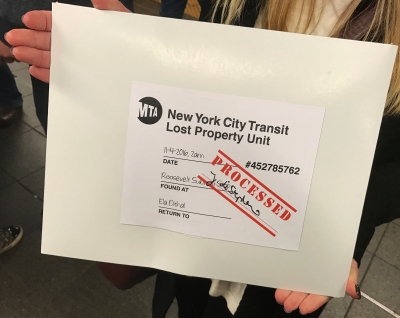 Our mission was to shake our hangover off, retrace our steps, and get the groom to his wedding.  Easy, peasy, Right?  Wrong!  Due to us drinking heavier than Bill Murray after the Cubbies spanked the Tribe in Game 7, we remember very little from the previous night, making this task slightly harder than one would expect.

We were instructed not to open our provided wallets until we entered the Subway and began our journey to Jackson Heights.  Moments later we found ourselves on a Subway Car feverishly searching our wallet for clues that needed to be solved, and there were quite a few.  The game was a foot and we were eager to destroy the competition, Highlander style!  THERE CAN ONLY BE ONE!!!

We solved the first puzzle almost immediately which was a hint to access the provided twitter account that Prescott and Curtiss had created specifically for the game.  From there we made some educated guesses on what the other clues could potentially mean, studied the boundary map, inspected every crevasse of our wallet and scoured every scrap of paper for information.  By the time we arrived at our station the five of us, emerged as Team Ela, our new found identity and we raced to our first stop. 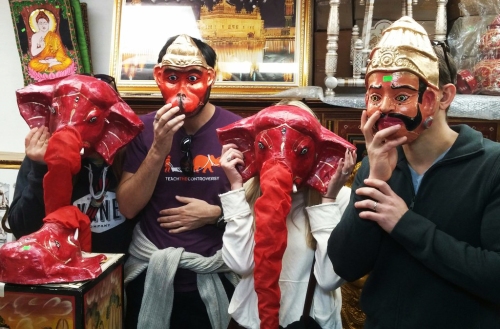 The clues that were given were designed so as they could not simply be googled, however throughout the game we used the internet quite a bit.  Maps to find our way around, IMDB, Twitter, and of course the google machine to assist whenever it was needed.  That was the magic of the game play and one of the reasons I loved this hunt so much.  I was extremely impressed on how Interactive Escapes was able to create challenging, yet attainable goals that were not completely ruined by the internets, if anything allowing the use of a Smart Phone only enhanced the game.

The mechanics of the game were pretty straightforward, solve a clue, go to that establishment, eat the dish that you are supposed to order, and Tweet a photo of your team eating the yumminess.  Since food is the source of miraculous healing, once the game masters saw this Tweet they would send you a “memory”, which would be used later to locate the final meeting spot.  The more puzzles you solved the more food you ate, and this was no ordinary food either.  We rocked dumplings, momos, brains, booze, and more!

One of the clues lead us to a spa where Kat had to get a Henna tattoo in order to solve the puzzle.

The scavenger hunt itself would have been fun but the addition of the food added to the overall enjoyment immensely.  Not to mention, the level of competition was fierce and contagious.  As we ran up and down city blocks, hectically trying to solve the clues that were being tweeted to us via Direct Message, we filled our bellies with the amazing food that this specific neighborhood of Jackson Heights had to offer.

If these Momos are wrong, I don’t want to be right!

As we stuffed our talking holes with these delightful morsels we followed the Twitter Feed and hoped that we would be victorious.  We fought hard and earned a respectable amount of points but due to a mistake on our part, waiting 25 minutes for the wrong Momo’s, early in the game, we failed to take the crown.  We did however come in third and were the only team to find the secret Easter Egg that Curtiss and Prescott had placed in the game grid.

I implore all of you that are reading this to bug, pester, annoy, and harass Curtiss and Prescott to set another one of these up, and soon!  Not only do I think this a must for any Foodie in the NYC Area, I really want to do this again, but this time I want to WIN!  Thanks for the heaping spoonful of Awesome Sauce Curtiss and Prescott, can’t wait until next time!

Even theme specific beer made an appearance!

P.S. If you are into scavenger hunts but not into leaving the house, check out Interactive Escapes Free Online Scavenger Hunt.  Only one person has beaten it so far, but I am on my way!  Good Luck, it can be infuriating.