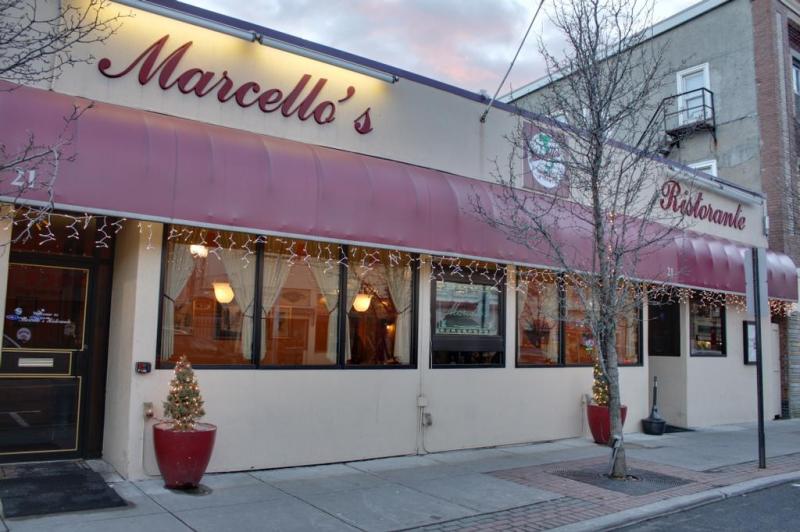 A while back, while I was still in college, I learned an extremely valuable lesson about expensive high end restaurants: I could not afford them.  That statement still rings true almost a decade later, but now I have found a loophole that I can leap through in order to dine at some of the area’s best and most lavish fine dining establishments on the cheap.  This loophole is known to the foodie community as Restaurant Week, and it does not just happen in New York City anymore.

Although the New York City Restaurant week is the most recognized Restaurant Week event in this area, many smaller communities participate in their very own. The rules vary for these events, but are usually similar to the New York City event, a three-course tantalizing special menu that shows off the chef’s talents for one low, low price, otherwise known as a Prix Fix menu; a complete meal offered at a fixed price. These set prices differ from event to event, but they always promise huge savings.

Kat and I are always game for these events because we get to try amazing food at reasonable prices, so when we see an event occurring somewhere close, we don’t mind a small commute. We were informed by another couple that The Hudson Valley Restaurant Week event was scheduled for March 19 to March 30 and we immediately agreed to go. Another fun part of a Restaurant Week event is deciding on which eatery that you plan on choosing. Most of these events have dozens of restaurants to choose from while others like the New York City event and the Hudson Valley event have hundreds. Choose wisely and you will have some of the best cuisine that your taste buds have ever had the privilege to absorb, choose poorly and you will be stopping at Burger King on the way home with an empty wallet and an empty stomach.

Choosing the restaurant you eat at is a very important task when dealing with Restaurant Week events. This year the Hudson Valley Restaurant week eatery that we decided to dine at was Marcello’s Ristorante of Suffern, NY. Most places that participate in these events will allow you to peruse the event menu prior to making a reservation; this is an essential step for choosing a good restaurant that matches the needs of the group that will be in attendance. I am usually a stickler for seeing that they offer a variety of proteins that allow people with allergies or biases to still have an enjoyable time. I can also not stress the importance of reading reviews online, to find out the dress code, the quality of the food, and any other concerns you might have before making a reservation.  Although Restaurant week can be much cheaper than eating at these restaurants on a regular Friday night, in this case the price of $30.00 is still somewhat expensive for the Blue Collar Foodies of the world and therefore this small amount of effort in selecting a restaurant can go a long way in providing a great event evening.

After reading the menu that Marcello’s had to offer, seeing nothing but outstanding reviews on the Googles, and listening to our fellow diners — who have been to Marcello’s a few times — rave about this establishment, the decision was a no brainer. Now the only thing left to do was make the reservations, which also must follow the rules of the restaurant during the Restaurant Week Event. When calling to make a reservation, you should inform the employee that you are attempting to reserve a table for a night that they are participating in Restaurant Week.   Some establishments have very few rules; others have more rules than pre nuptial agreements of the rich and famous. The standard law is that most restaurants only offer their Restaurant Week menus Sunday thru Thursday to drum up business during the week.  We decided to go with a Thursday reservation at 7 p.m.

Thursday night appeared in no time, and we were off right after work to Marcello’s of Suffern, New York.  We arrived at the restaurant a few minutes early and decided to have a few drinks at the bar.  The six of us each had a cocktail and awaited our table’s readiness.  Once our table was prepared we had a seat and were given the restaurant menu, with the regular menu. Note: some restaurants try to hide the restaurant week menu; don’t be afraid to ask them for it. While we were seated discussing the finer points of the Jets, home improvement, and the upcoming holidays, the wait staff delivered some delicious fresh bread to our table and took our order.

I am a procrastinator in all things connected to my life and like to make my decisions on the fly, so I always read the menu fervently as the waiter makes his way around the table.  This decision was an arduous task indeed due to the fact that all of the food described sounded awe inspiring.  At the very last minute, I narrowed it down to two different entrees and asked the waiter to decide for me. I was wedged between the Salmon encrusted in a horseradish and the pan-seared Grouper over a ragu of Chickpeas, sweet peppers, tomatoes and leeks.  The waiter used one profound statement to get me to make a decision for myself: you see salmon everywhere, when is the last time you saw grouper?With a nod of my head, I had agreed to order the Grouper as my Entrée. As for my appetizer, there was never any doubt that I was going with the Sautéed Snails with Mushrooms and Garlic in a delicious wine and tomato sauce.

Kat is not an adventurous eater as most of the readers of this blog can attest to, but during Restaurant Week she has been known to shake up the status quo every so often. Kat decided to start her meal with the Warm Goat Cheese Salad — goat cheese on top of greens with walnut, apples, and sweet roasted peppers in a garlic lemon mustard dressing.  As for her entrée, Kat went with the Braised Beef in Chianti wine & vegetable sauce served with polenta. Although the salad and the beef were expected, the polenta and the goat cheese were quite crazy for my wife.

The pleasant dinner conversation continued between our three couples as we imbibed some alcohol and waited for our first course. When it did arrive, it was magnificent — at least mine was.  I was given a generous portion of tender snails swimming in a flavorful tomato and garlic sauce. Snails are a very hard dish to get right and I have had some good attempts as well as some bad attempts at this dish. This dish rivaled the snails that I had in France that started me on my snail kick. They were not stringy or gummy, which can happen when they are overcooked, and they were not mushy and slimy, which tends to happen when they are undercooked.  As in the story of the three bears, these snails were just right.

Kat’s salad was enormous and looked like they had just picked the greens from the garden. The goat cheese was delivered in a small fried patty that I was afforded the privilege to taste and it was stupid good. The crust was crispy and the goat cheese melted in your mouth, mixed with the greens it was heavenly.  Kat enjoyed it as well; especially the dressing which, in her words, was subtle and delicious.

Out of the six of us that were dining, only one other got something different than the snails or the salad, and that dish was the homemade potato gnocchi with venison ragu. I was also able to try this tempting dish, and it was tasty. The venison must have been cooked for more than 8 hours, because it was extremely tender and fell apart at the slightest touch. The gnocchi itself was also fantastic, and complemented the rich vibrant taste of the ragu.

When my entrée came out I was astonished by the portion size of my grouper.  It was bigger than most pieces of fish that you get when you are dining out and the quality seemed superb. The grouper married with the ragu flawlessly and I cleaned my plate before it even had a chance. Kat’s braised beef was smothered in a savory sauce that not only tasted great on the beef but paired well with the polenta as well. There was a small hiccup in the kitchen which caused one of our meals to be delayed, but it was rectified within five minutes. 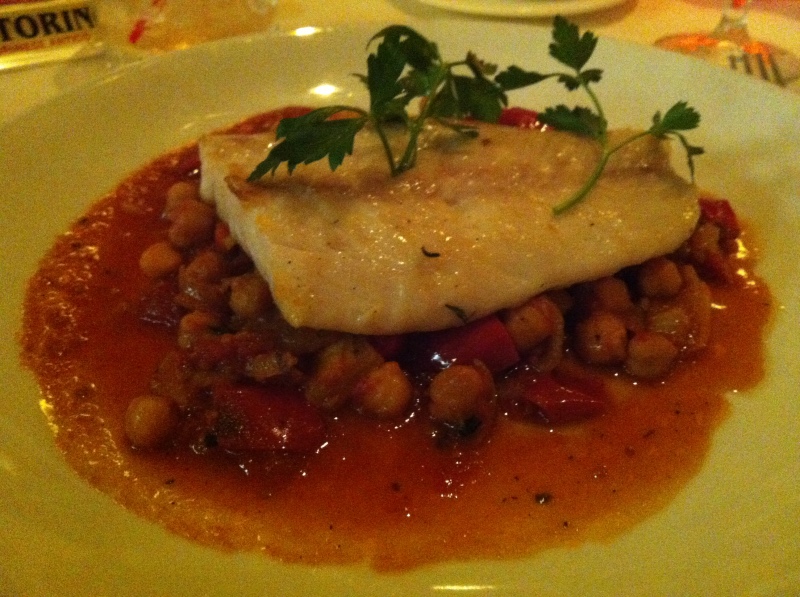 After dinner was complete, the waiter brought a combination dessert platter for all us that was included in the Restaurant Week price. We all got a small portion of Semifreddo — which literally translates to half cold in Italian — tiramisu and custard.  All three of these desserts were wonderfully prepared and presented beautifully. 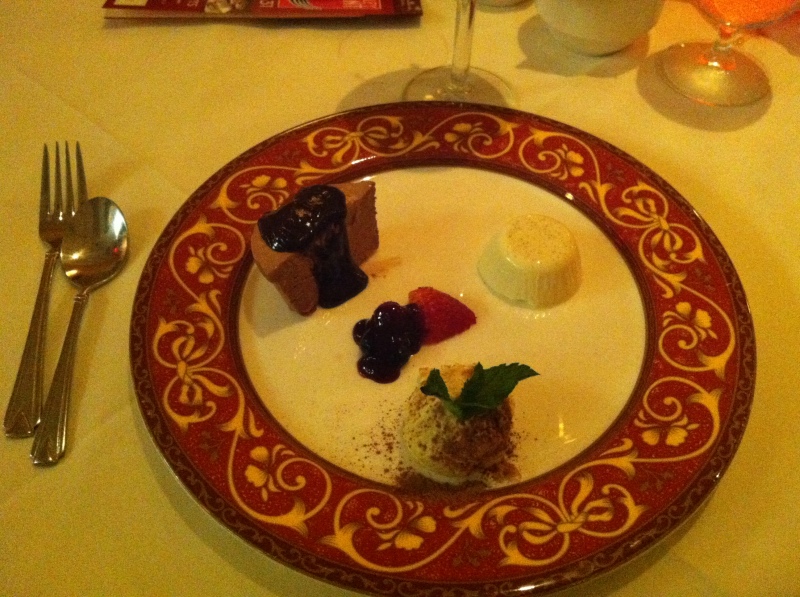 The important thing to take away from this blog, is not the obvious, which is I really like Marcello’s, it is that Restaurant Week events are your inexpensive meal ticket to restaurants like Marcello’s.  Remember to keep your eyes open and your ears to the ground in order to take advantage of these brilliant foodie experiences.  Or you could just search the googles…

Valet parking from 6:00pm Tuesday to Saturday only.