As every self proclaimed foodie in Bergen County knows, Ridgewood offers an assortment of fine dining options that tantalize even the most refined flavor palates. With that said, the menus, although ever-evolving and very tempting tend to be a tad expensive for the average Blue Collar Foodie. In order to entice my fellow frugal foodies, I have decided to open my wallet a little bit more than I would usually like to, and try some of the best that Ridgewood has to offer.

There are three things to keep in mind when you are heading out to a local “5 star” eatery that assists in the dampening of the blow that the large bill may cause.  The first is that you do not need to pay $12 to cross a body of water that is no wider than Route 80, secondly there is no fighting with the camera toting tourist for the last parking spot in the village, and finally you don’t have to pay the exorbitant prices the City restaurants charge you for a $10 dollar bottle of wine so they can pay rent that month.  These thoughts help me get over going slightly over my normal per plate budget, and allow me to enjoy the meal without thinking of the beating my bank account is taking.

My sister frequents the establishments that line East Ridgewood Avenue and the surrounding area quite often so I asked her for her recommendations on a restaurant to review in this area.  She did not have to consider her options for exceedingly long, before she told me about Mediterraneo, located on North Broad Street, which is around the corner from the main strip.  She spoke very highly of the quality of the food and the excellent Mediterranean inspired fare.  Upon searching the reviews online, and perusing the menu, it sounded like the perfect place to enjoy a sit-down meal with another couple, Kevin and Kim, that we were meeting up with for dinner, later in the evening.

I failed to realize that reservations were suggested but since I got stuck at work and we were not going to arrive at Mediterraneo until 9:00 P.M., I assumed that we would not have a problem finding a table.  I was incorrect, and when we arrived at the restaurant it was packed.  Which is not really, saying that there were a lot of people inside, but due to the intimate setting Mediterraneo has to offer it was enough that we had to wait for an available space.  Unfortunately for us, there is no room for a waiting area inside Mediterraneo, so we were forced to wander the streets of Ridgewood for a while until a table was vacant.  The hostess offered to take our phone number, which was greatly appreciated, and call us when our table was ready.  With our name on the list and our number on speed dial Kevin and Kim, Kat (my wife), and I walked a few stores down and entered a Dunkin’ Donuts’ and had some coffee while we waited for the phone call.

In the end, we waited approximately 30 minutes for our table to be ready, which on a Friday night is not all that bad.  Once we entered the restaurant and made our way to the table, I instantly noticed the brilliant décor.  The vibrant colored walls mixed with dim lighting, set the perfect mood for a night out with friends.  The, what seemed like, hand blown pendant lamps were a beautiful addition over each and every table.  Kat also fell in love with the mural that adorned the wall, which also looked like it was hand painted.  Since I just lost at least one man point for this paragraph, and this is a food blog and not an interior decorator’s blog I will stop my rant about the appearance and move on to the more important issue; THE CUISINE.

Shortly after we sat down, the waitress delivered us our menus and offered to open one of the bottles of wine that Kevin and Kim brought.  With our butts in seats, wine in our glass, and menus in our hands the food journey was about to start.  Mediterraneo, offers three separate menus, one of them is for their daily tapas specials, one is for the fresh fish, and the other is for their featured entrees.  The chef changes the menus due to the availability of fresh ingredients, which creates the potential of a new experience every time one goes to Mediterraneo.  I truly enjoy restaurants that use this theory to create their offerings because the dishes tend to match the current climate and seasons.  Not many people want to order chili in August or gazpacho in December.

We decided to order an item off the tapas menu for the table to start, which was a Pork Loin dish covered in a whiskey sauce, surrounded by fingerling potatoes and dressed greens for $9.00.  Kim and Kat both ordered the skirt steak entree with Arugula, fennel, roasted bell pepper, cherry tomatoes, shaved Parmesan, and toasted pine nuts for $23.00.  Kevin decided on the Paella Valenciana, which was described as shellfish, grilled chicken, chorizo, over Spanish style saffron rice for $25.00.  Lastly, after much deliberation — I am the slowest person ever when it comes to ordering food — I ordered the whole Branzino which was listed as a grilled whole fish, stuffed with Mediterranean vegetables, with a touch of Pernod for $26.00.  As stated, these prices seem too high and even knowing all the money I was saving by being in Ridgewood instead of New York City, I still felt slightly guilty about being so uncharacteristically bourgeoisie.

The feeling of guilt soon melted away faster than a slab of butter on a piping hot baked potato when the first course came out.  The Pork Loin was expertly cooked and flavored.  The whiskey sauce was prepared in such a way that the smokiness added just the right flavor without oppressing the delicate nature of the pork.   The fingerling potatoes were slightly seasoned with a Mediterranean spice that I could not place, but fell in love with and the greens added just the right amount of color to the dish.   At first when the server placed the small square plate in the center of the table, I was nervous that there was not going to be enough to go around, but this pile of meat just kept going.

After the tapas course, we indulged in another glass of wine and some more pleasant dinner conversation. When the food hit our table, the smell was phenomenal, unfortunately it lingered for a bit longer than I would like before we had our first bite. The food came out slightly staggered which caused that extremely awkward moment where some people have their food and some people don’t.  After several rounds of me telling people not to wait and them insisting on waiting, my whole fish came out of the kitchen and all was right in this foodie’s world.  My branzino, which I had to Google when I got home to find out is European Sea Bass, was elegantly presented with asparagus and fingerling potatoes.  The fish was grilled over charcoal briquettes which added a marvelous essence to this already scrumptious piece of fish.  The flesh of this sea faring creature was moist and succulent while the skin was crispy and delicious.  I am also not quite sure if the Mediterranean vegetables could be called a side dish per se, as they were more of a co-star to this dish. I know that I have said the statement, “this is the best (fill in the food here) that I have ever had,” about as many times as I have uttered the phrase, “I am never drinking again”, but seriously folks, this was the best whole fish I have ever eaten.

Kevin’s Paella was overflowing with scallops, shrimp, mussels, clams, and calamari.  It was a plethora of tasty sea creatures that could only be described as an extremely generous portion.  Kevin seemed to enjoy this dish as well considering he cleaned his plate and described it as a tender and tasty Mediterranean twist on a dish that can come up flat if not prepared well. 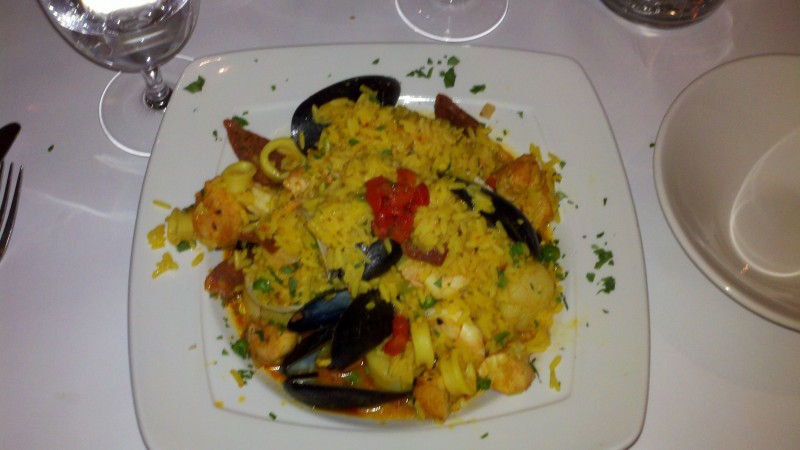 Kim and Kat were raving about the Skirt Steak meal that I had to steal a small morsel from my wife’s plate, and they were most definitely not wrong to sing the praise of this delightful piece of meat. Kim was especially happy with the grouping of the sauce and the veggies combined with the steak that created the perfect ratio of star to supporting characters. Kat described her dish as a splendid juicy steak with a complex flavor that caused her to want more and more after each and every bite.

After dinner we decided to order some dessert before we left.  Kat and Kim opted to share the berry tart, Kevin decided on the custard, and I went with the Baklava.  I am always the type of person that tries to immerse myself into the food culture of the region that the restaurant is claiming to be inspired by.  That premise has led me astray at some points in my foodie career but not this time, the Baklava was spectacular.  I am sure the other desserts were also good, but I am a sucker for the classics. 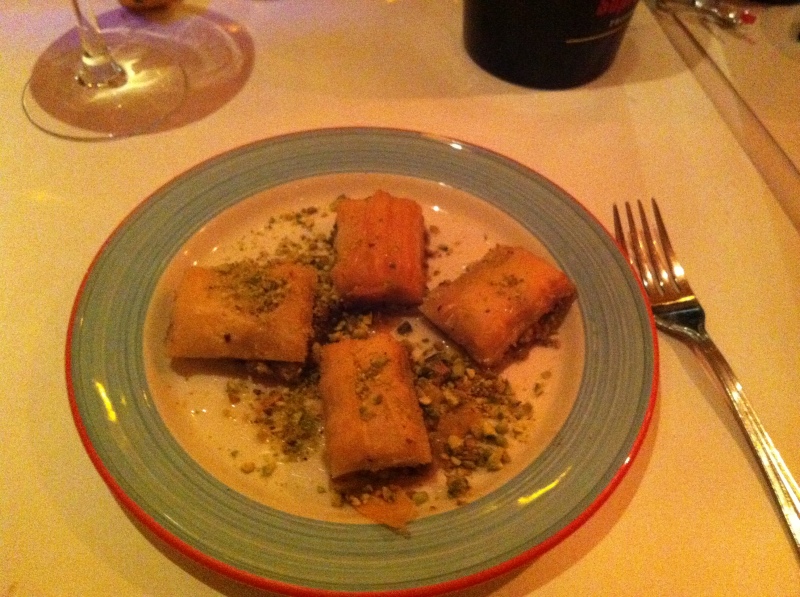 Subsequent to the final punch being dealt by the dessert, it was time for the judgment.  The final bill was $139.00 plus tip, which brought the final bill to about $170.00.  Apart from the price of the final bill, I would not change anything about this dining experience.  Good friends, inviting atmosphere, and extraordinary food made dining at Mediterraneo a truly enjoyable experience.