As the end of summer draws near and the seemingly endless supply of weekend barbecue invites slowly dissipates on my Facebook page, I can’t not help but shed a hickory flavored tear.  The enticing sound, amazing smell, and astonishing taste of searing meats, which were marinated for two days in homemade sauces, cooked to perfection with flawless grill marks is enough to cause a foodgasm, and the sheer thought that soon these events will  soon disappear is enough to make this foodie blue with sadness.

Just as I was contemplating going to Costco and buying a Fred Flintstone sized rack of ribs and going into a Barbecue induced Hibernation for the cold, soul less, barbecue-lacking months that lie ahead, I received an E-mail from LivingSocial.com, an online company that delievers local deals to your inbox.  Like a warm beacon of hope this E-mail shined through the impending gloomy darkness, and invited me to try a barbecue spot called Bourbon BBQ, located at 529 Goffle Rd., Wyckoff, N.J. 07481.  Living Social had come through in the clutch and delivered not only a new Barbecue joint to test out but a half off coupon for something called the Garbage Plate, which appeared to be a barbecue sampler for two.

Upon further research I found that the Garbage Plate was in fact made for two and consisted of bourbon ribs, beef brisket, pulled pork, Texas smoked sausage, coleslaw, smokehouse beans, collard greens and corn bread.  I immediately purchased this living social coupon and scheduled a date with Kat for the first available day in our calendar to try this alluring dish offered by Bourbon BBQ.  Their website also informed me that Bourbon BBQ is a BYOB establishment, which always makes this foodie smile, and I noticed that you can make reservations on their site as well.

As we entered Bourbon BBQ, the first thing I noticed was the tantalizing smell wafting about.  I could tell right off the bat that this was not a B.S. BBQ joint due to the smell of smoke lingering in the air.  Kat and I approached the counter and spoke to the hostess who allowed us to choose any table that was available.  We made our way to a table that was empty and sat down with my beer and Kat’s cider in tow. 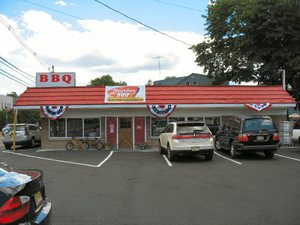 Before our rumps could warm the seats we had just taken, our waiter appeared in front us and handed us our menus.  We explained that we had the Living Social Garbage Plate coupon and took our drink orders at this time as well.  Our waiter then left the table, and returned quickly with a bottle opener and some glasses for our adult beverages.  The prompt service was highly appreciated because we arrived to dinner close to 8 P.M. and were famished.

As Kat and I discussed our hectic days over a few sips of our cocktails, we eagerly awaited our meal.  Which we did not have to wait long for, and that made both of our bellies smile.  What exited the kitchen and landed on our table was a colossal pile of barbecue, and it was love at first sight.  In addition to the food itself, the server also delivered a caddie full of homemade barbecue sauces, which he described in detail to us one by one, and a roll of paper towels.   More so, before the server left he explained the Garbage Plate to us, pointing our each item of the plate, which for a first timer at Bourbon was extremely helpful.

I consider myself a sauce aficionado, so when the server explained each sauce and informed us that they were all homemade, I paid attention like a physicist listens when Stephen Hawking talks about black holes.  With that said I feel obligated to not only name these sauces but also give you my first impression of them as well, the following is the list:

Although the offering of specialty craft Barbecue Sauces, which you can purchase online or in house,  is all well and good, let’s face it, one goes to a Barbecue Restaurant for the meat not the sauce.  I would be remiss if I did not discuss the Garbage Plate Sampler in detail and tell my loyal audience all about Bourbon’s actual Barbecue.

Kat and I attacked this monumental mound of mouthwatering meat as if we were at war with the plate, and employed the “divide and conquer “strategy.  We started with the Pulled Pork, and shoveled a healthy helping onto our plates.  We first tried these delectable slivers of swine sans Barbecue Sauce and at that moment we knew the rest of the meal was going to be utterly remarkable.  The meat was so tender, chewing it felt like overkill, all I needed to do was let it linger in my mouth for a few seconds as it dissolved on my tongue.   Then we decided to splash on a few drops of the different types of Barbecue Sauce and the pulled pork, in the immortal words of John Candy in Spaceballs, went to plaid.  All the sauces transformed this meat into something else, something almost entirely different but equally as tasty.

Next up was the Brisket which was piled high enough to be a meal of its own.  Kat and I once again divided the portion and dug in first without sauce and then with.  This may have been the best brisket Kat and I have ever had, and that is saying something since I like Brisket like Rex Ryan from the New York Jets likes feet.  The meat was tender and succulent with just the perfect pink around the outside to remind you that it lived in a smoker for quite some time.  Once again the sauces that were offered only added complexity to the already impeccable taste. 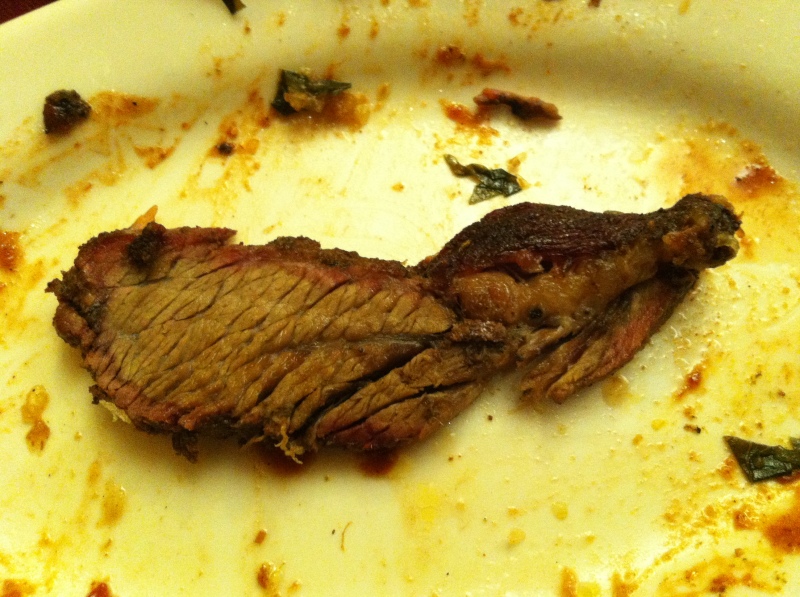 The Texas smoked sausage reminded me of the smoked Kielbasa that I make at home.  Except for Bourbon BBQ is able to get the skin to the perfect amount of crispness that I just can’t seem to achieve.  I was unsure just which barbecue sauce to match up with these crisp morsels of smokey goodness, so I ate them naked. 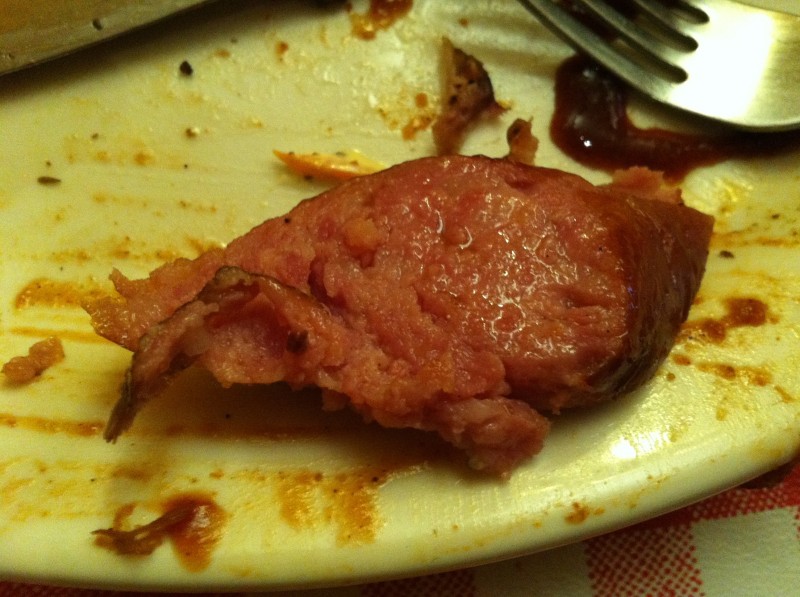 The piece de resistance of all Barbecue plates and really how I ultimately judge barbecue chefs is the ever important ribs.  These behemoths were not your run of the mill miniscule baby pork ribs either, these ribs looked like they came for hogasaurus.   Bourbon’s ribs are the type of ribs that make most men feel inadequate if you know what I mean, and that is just the way I like it.  At first bite I noticed that the meat did not need much help in separating from the bone, which is a great testament to the chef with ribs this size.  I was a little underwhelmed by the flavor of the ribs during my initial bite but then I added a small amount of barbecue sauce and the rib came alive like Frankenstein’s Monster.  It appeared that Bourbon’s Ribs were only cooked with a dry rub so as to allow the customer to choose the type of sauce they want to add at the time of consumption.  The sauce complemented the rib meat effortlessly and I found myself leaving not a speck of meat left hanging on the bone.

As for the sides, the Baked Beans actually have what appeared to be pulled pork in them, which made them even better than I expected.  The Cole Slaw seemed fresh and did not have that store bought chemical taste to it that leaves a bad taste in your mouth.  The Collard Greens tasted fantastic, as they were not too vinegary, which tends to happen in the north.   The corn bread was exactly as I like it, sweet enough to be a side, but not sweet enough to be dessert.  Kat on the other hand was hoping for dessert corn bread, but she was pleased with the other sides.

Not only was the food marvelous but during our dinner our server came over several times to check on us, which is always under appreciated.  Furthermore, throughout our time at this restaurant who I believed to be the General Manager walked around to every table, including our own, to speak to the customers.  One by one he approached every table and made sure that everything was cooked to their liking and just made some small talk.  Kat and I love small businesses and this added special touch made us feel like Bourbon BBQ truly cared about us, as individuals and not as just another customer.

Bourbon BBQ’s menu is quite extensive and if our first visit is any indication of how all the other items are going to taste, I can see this foodie squandering many an hour at this establishment.  Kat and I both felt that Bourbon’s amazing sampler dish can compete with any and all Barbecue joints that we have frequented in our decade together.   This combined with the fact that they are right next door in Wyckoff and their prices are truly affordable, very well may have placed them number one on our BBQ list.  So when the snow begins to fall and you place your cover on your grill for the last time this season, make sure to stop by Bourbon BBQ when you get the hankering for some good old fashioned BBQ.