Throughout my many years as a foodie I have visited countless restaurants searching for phenomenal interesting cuisine.  Since I have been on this endeavor for such a lengthy amount of time, it gets harder and harder to find new restaurants to take a bite out of.  I sometimes feel like a nomad wandering out of town, to another county, or even across state lines in pursuit of a foodie find worth talking about.   Imagine my surprise, when I was informed that I had been missing out on some of the best Indian food in the state, right in my own backyard.  After receiving messages from several of my Facebook friends urging me to give Bhoj, located at 430 Market Street, Elmwood Park, NJ 07407, a try, I had no other option but to heed their advice.

Kat and I are no strangers to ethnic food, which you know if you read this blog, so when I mentioned the possibility of Indian food for dinner Kat did not even let me finish the question, before responding, “YES!”  After a long day of work and a short stint at the gym, Kat and I hopped into the car with our appetites and headed to good ‘Ole Elmwood Park to experience all that Bhoj had to offer.

At first glance, Bhoj, does not seem like much, due to the fact that it is located in a shopping plaza with a Dunkin Donuts, a liquor store (wink, wink, nudge, nudge, Bhoj is a BYOB), and a Laundromat, but as I have learned quite a few times on my epicurean adventures, looks can be deceiving.  As we entered Bhoj, the intoxicating aroma caused us to forget what the building looked like outside and focus on the interior of this enchanting restaurant, which was decorated with an authentic Indian theme.  I felt like Tucan Sam as I followed my nose through the restaurant as we were seated by our waiter.

Once we were seated we were welcomed to the Bhoj by our server and handed two menus and a list of specials.  While perusing the menu our waiter brought over two glasses and filled them with water while we attempted to make our decision.  When the waiter came back, as per usual, Kat and I could not make up our minds so I asked him to suggest an appetizer.  More often than not a waiter or waitress will choose an item on a whim when requested to advise a diner on what they should eat, but not at Bhoj.  I was happily surprised when our waiter engaged us in a short conversation in an attempt to judge our likes and dislikes before just offering a random dish for us to order.  Armed with the knowledge that he collected from our conversation our waiter competently recommended the Vegetable Samosas with Channa which was described as crispy golden brown triangle pastry stuffed with potatoes and green peas.  We of course took our waiters advice and ordered this alluring appetizer while we scrutinized the menu some more looking for the perfect entrée.  Our waiter also asked us what degree of spiciness we would like our appetizer to have, E.G. Mild, Medium, or Hot.  We requested medium, but our waiter seemed slightly suspicious about our heat tolerance and suggested Mild Plus for the appetizer and if we wanted more heat, he would adjust our entrées accordingly. 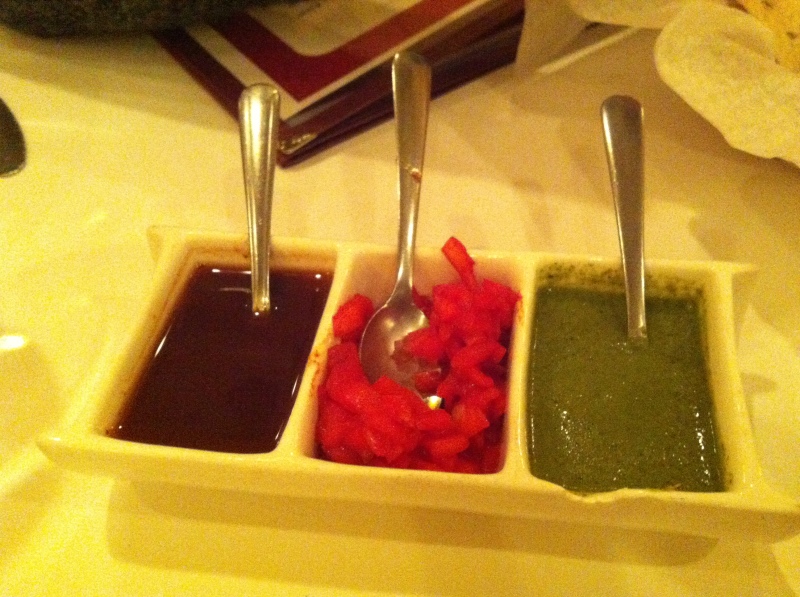 Once our appetizer order was in, a waiter came to our table and placed a basket of crispy flat-bread that I believe was Khakra and a dish divided in thirds which housed three distinctly different sauces for said Khakra.  I have to admit that Bhoj scored some points with this foodie by adding the dipping sauces, which were wonderful by the way, because I am huge sauce fanatic, so much so that I have an entire shelf dedicated to sauces is my refrigerator much to Kat’s chagrin.  As we chowed down on the complimentary Khakra we made our final decision for our main course and relayed them to our waiter. I decided upon the Bhuna Gosht for $17.95 which was described as Lamb cooked in special thick gravy with exotic spices and tomatoes, whereas Kat went with the Chicken Tikka Masala for $16.95, which was described as boneless pieces of Tandoori chicken cooked in a creamy tomato sauce.  We also ordered Garlic Naan for $3.95 and Basmati Rice for $1.50 to complete our meal. 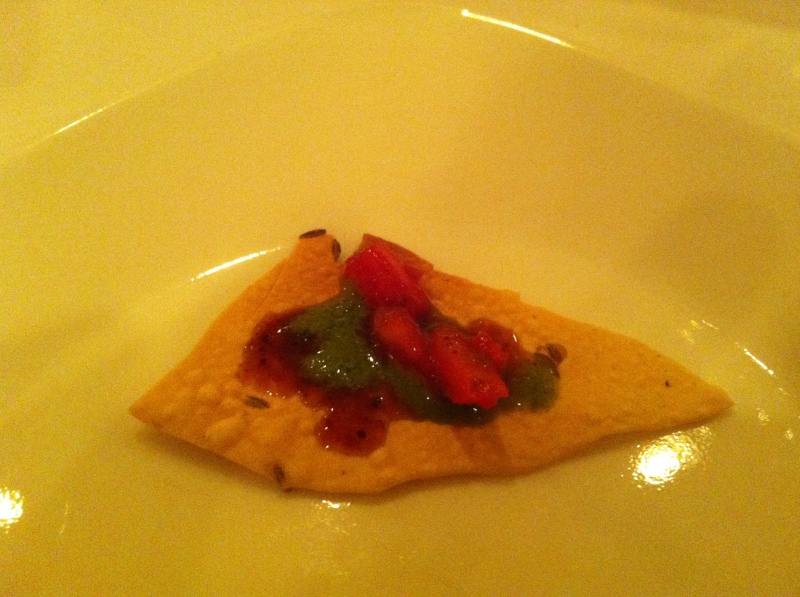 Khakra all dressed up

Shortly after we ordered our entrées, our appetizer arrived on the table and it was presented beautifully on the serving plate. The two overstuffed triangle pastries were fried to perfection and placed on the dish surrounded by the Channa creating an edible piece of art that any refined foodie, including Kat and I, would feel bad destroying.  That is, until we tasted the first bite, and then we devoured every last morsel of this fantastic dish as if we were a bunch feral carnies that have never used a fork before.  Yea, that is right! It was acting like a feral carnie good! 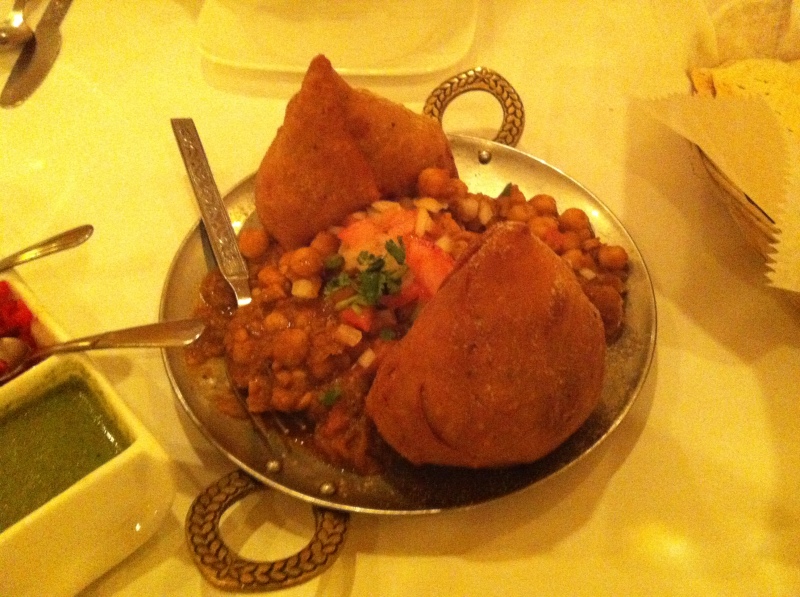 While we were demolishing this delectable treat, our waiter approached the table to inquire about the spice level, so the Chef could prepare our meals properly.  Although, this seems like a minor detail, it is interactions like this that separate run-of-the-mill eateries and exceptional establishments.  Kat and I felt that the waiter and therefore Bhoj, honestly cared if we were enjoying their cuisine and wanted to do adjust the spice level to the appropriate tolerance so we would have the best possible experience they could provide.

After we were done with the appetizer, our table was cleared and the table was prepared for our main course.  When our dishes arrived the smell alone caused me to salivate like a rabid Chupacabra in heat.  As is the custom, Kat and I spooned a portion of rice on our plates, which we then topped off with a serving of the entrées that we ordered.  Each bite revealed more and more of the depth of flavor these dishes possessed.  The addition of the Garlic Naan only added to this magnificent feast. 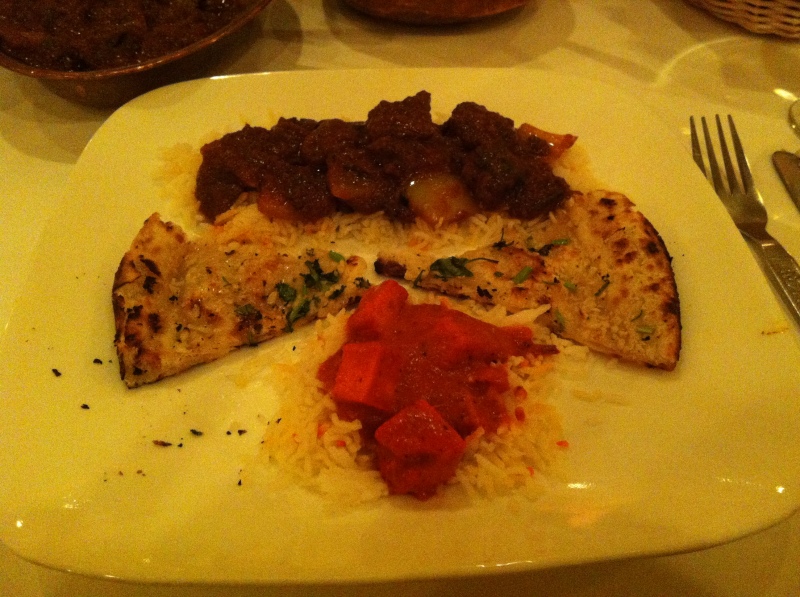 The portions were extremely generous and we only ate half of our meals before we felt as if we could not eat another bite. That is, until our waiter approached the table and asked about our thoughts on dessert.  He highly recommended the rice pudding, and since he had not steered us wrong all night, we followed his guidance like he was our gastronomic Sherpa.  Once again his expertise navigated us down a path of culinary enlightenment.  The rice pudding not only tasted great but snuffed out any lingering effects of the tingling sensation that accompanies proper Indian cuisine.

I have to say that I was exceedingly impressed by Bhoj.  The ambiance enhancing modern Indian music combines with the traditional design theme to create an environment that is perfect for dining, while the tremendously helpful and attentive staff serves some of the best tasting Indian food that I have found in this area.  The lesson to be learned from Bhoj, is that sometimes what you are looking for can be found closer than you think, as long as you have an open mind and an open stomach.