Every day most of us drive down the same roads to and from our nine to fives, sipping coffee and listening to mind numbing talk radio, paying no attention to our surroundings. I try my damnedest to not fall into this monotonous trap by taking different routes at times to liven up my commute, but alas, after a certain number of years every path becomes mundane. This frequently welcomed autopilot mode, could cause the not so attentive urban foodie to miss out on some wonderful eateries that are often overlooked on the roads so frequently traveled.

I fell victim to this sad happenstance recently, and I feel that I should inform my readers that sometimes it is a good idea to act like man’s best friend and stick your head out the window from time to time. Perhaps even try not updating your 13 social media pages, while driving with your knee, and eating your fried green tomato, bacon, remoulade, and egg brioche sandwich while on the way to work. If I was not guilty of DWZ, Driving While Zombified, I would have noticed that there was an authentic Vietnamese Noodle House on my way to work. Furthermore, my foodie street cred would not have been worse off than Mike Myers’ career after The Love Guru, because I would not have had to be informed of this off the hook establishment by a Brooklyn Foodie. (Relax Brooklyn, I love you guys, but even you know that some of your comrades can be quite ostentatious and downright douchetastic!) 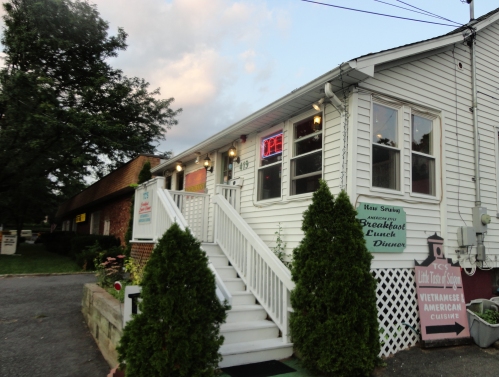 The restaurant that I am referring to is a quaint joint by the name of TC’s Little Taste of Saigon, located at 419 Goffle Rd. Ridgewood, NJ.   Don’t be distraught if you too drive past it each and every day without giving it a second thought, because this eatery is located within a house in a mostly residential neighborhood. I almost drove right past it, and I knew what I was looking for.

When you enter TC’s you get the feeling that you are walking into a friend’s family member’s house for dinner, not a restaurant. Some people may be put off by this, but I was all sorts of excited. Visions of truly authentic Vietnamese food danced in my head, the type of food that one used to be able to get in the city before the hipsters took over and created fusion.   As we, Kat, Rory, and I entered this magical worm hole that dropped us off somewhere in the P.H., Pre-Hipster, era of the foodie scene, we were greeted by one of the proprietors and seated in the living room, errrrrr, dining room.

Once seated, we were offered our surprisingly hefty menus and empty glasses for our bottles of beer that we brought from home. With our glasses now full of high-end craft beer, our attention was focused on the task of choosing our food for the evening.

As stated above, the menu was much larger than one would expect from such an intimate restaurant, so the charge of picking our meals was one that was not as easy as we first suspected.   After doing some table side research on the googles, I found that all my fellow foodies were raving about the Rice Paper Spring Rolls, so we decided to give them a whirl for our appetizer. We each also ordered a Pho dish, a Vietnamese noodle soup consisting of broth, linguine-shaped rice noodles, a few herbs, and the protein of our liking. Since TC’s smelled more enticing than patchouli to a hippy, we added the Spicy Beef Stew to our smorgasbord of goodies. 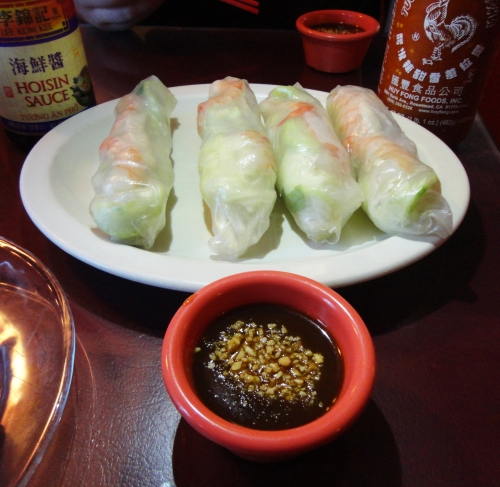 A little more table side smart phone exploring yielded some very interesting information about TC’s. Apparently, this restaurant is run by two sisters that perform the job of waitress, hostess, chef, and general manager. This intel further added to the thought that we were dining at someone’s house, and the anticipation to try these assiduous siblings’ fare was perpetually building with every minute of small talk.

Just then our Rice Paper Spring Rolls arrived at our table. Without hesitation each of us removed a roll from the plate, dipped it in the house sauce, and took our first bite. Each of us chewed that bite for quite some time and said nothing to each other until we swallowed. The first words that came out of each of our mouths were the best compliments that any Jersey Foodie could possibly give, although I don’t remember the quotes exactly, I assure you that those phrases could not be uttered on network television. These spring rolls were the perfect combination of crisp and fresh, and when combined with the homemade sauce that was served with it, created a depth of flavor that sent my taste buds into traction.

After we completed these tasty rolls of savory goodness, our main courses arrived, and they looked and smelled remarkable. The portion size was much larger than we anticipated, and all three of us began to ponder if we had ordered with our eyes instead of our stomachs, but the prices were so reasonable. The Pho even came with a side dish of fresh herbs and bean sprouts that was a great addition to these already beautifully presented meals. By fresh herbs, I mean literally garden fresh herbs that grow just outside the kitchen in flower pots that line the parking lot.

Using the chop sticks that were provided, I scooped out a generous portion of my Seafood Pho and allowed it to cool down to an edible temperature. I then took my first bite of this Pho and fell in love all over again. The broth was delicate, yet flavorful, and had just the right amount of kick to compliment the noodles and fresh seafood. I am usually the type of person that will put sauce on just about anything that I am served, but this dish needed nothing, it was utterly perfect, and each bite only echoed that thought.

After forcing myself to stop eating the astounding Pho that TC’s had prepared for me, I took my first bite of the Spicy Beef Stew that we ordered to share. When we ordered it, we were warned that spicy actually means spicy at TC’s but decided to forgo this forewarning and embrace the zesty cultural food that is synonymous with Saigon.   We, being spice freaks, were not disappointed, however if you are not a spicy food connoisseur, I would suggest always heeding these types of warnings when eating at ethnic food spots.   Besides the invigorating heat that this dish provided, it had other subtle flavors that made their way through as well.

As our food consumption slowed down, we were struck with the sad realization that our adventure at TC’s was almost at its end. Even though we were completely satiated, we found ourselves continuing to eat our food, we even at one point made mention to how gluttonous we were being but then just kept on going. After all the bowls were clean, our waitress/souse chef/hostess came to our table and simply stated that we can stay as long as we would like because they enjoy the company.

Some people think that I am overly obsessed with food, but it is life lessons like this one that make my epicurean adventures worth it. TC’s Taste of Saigon is one of those truly extraordinary restaurants that unfortunately could blend into the background of your ordinary journey if you are not careful. Do yourself and all of your friends a favor and head out to TC’s, just let me know when you are going because their parking lot is kind of small.