Hat City Kitchen Fills Your Belly and Your Soul!

Back in the day, before I was The Blue Collar Foodie, while Michael Phelps was taking bong rips and Kanye was telling Taylor Swift that he was going to let her finish, I was driving across this crazy country of ours.  The year was 2009, Kat, her brother Benni, and I decided to jump in an SUV and drive from one ocean to the other, just ‘cause.  I got the zany idea to blog about our adventure and thus I was bitten by the blog bug, which in turn gave birth to the site you are reading now.  So, I guess Stan, Cartman, Kenny, and Kyle were wrong, it is not Canada that is to blame after all, it is California… and Kanye… Always blame Kayne!

During our expedition westward we visited countless cities that contained locations that we never thought we would see with our own six eyeballs.  Some of them were the ordinary tourist traps, while others were happy accidents that were nothing short of spectacular.  One such surprise was in a little town called Chicago!  The windy city treated us right, gifting us with the fountain from the beginning sequence of Married with Children, a giant deep dish pizza from Giordano’s, a Cubs game at Wrigley Field, and a true Chicago Blues experience at a spot recommended by one of the natives.

While we were having our nightcap at this local after-hours joint, enjoying the live music and mouthwatering food, I remember trying to figure out why New Jersey did not have a spot like this.  Sure, New Jersey has a few local bars that have live music, but there was something about the energy and the vibe of this place that was utterly authentic.

It has been seven years and I thought I would never experience a place as real and raw as this tiny Chicago club in good ol’ Jersey.  That is, until I was turned onto a little place called Hat City Kitchen, located at 459 Valley Street, in Orange, NJ. 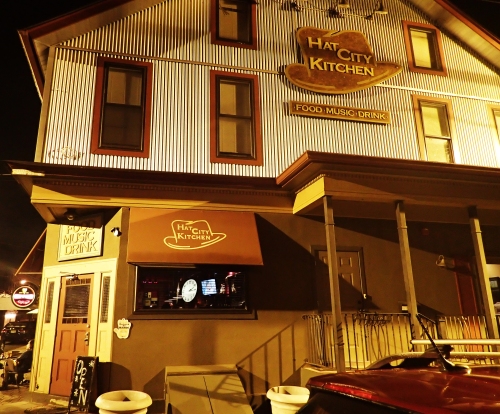 ***Before my custom built D-Bag filter catches all your angry hate mail, let me add this little caveat. I am well aware that we live across the river from the music and food mecca known as NYC. I venture there quite often.  However, as a card carrying New Jersian, you can’t tell me that crossing those bridges and tunnels all the damn time doesn’t get F-ing annoying after a while.  Sometimes, hitting up a local, and epic eatery in this armpit we call our home, is just what the foodie ordered.***

Enter Hat City Kitchen, an eclectic eatery with live music six nights a week, a fully stocked bar complete with craft beers, and food that is so damn good it will make you sing.  The first time we visited this relatively new spot we were not sure what to expect, but as always we drove to the Restaurant with an open mind and empty stomachs.

Not a bad seat in the house!

The exterior of Hat City Kitchen is extremely welcoming and has an almost old school Saloon feel to it, which immediately set the mood for what we were about to experience.  As we entered, we were instantaneously greeted by the welcoming hostess and sat down within seconds.  The band was still setting up and the dining area near the stage was almost full, yet the service was still impeccable.  Our drink orders were taken within minutes of our arrival by our extremely vibrant waitress and we were left to peruse the menu and soak in the ambience.

Hat City Kitchen is decorated with numerous paintings of famous musicians that would have played at a venue just like this, when venues like this actually still existed.  We played the fun game of guess the artist with each painting in the room while we carefully read the menu in order to choose just the right meals for our night. To be honest, after tasting what we chose, I am not sure if we would have been disappointed with any of the selections we were hemming and hawing about.

We decided to go with an order of the Hot Buttered Mushrooms to prime our appetites before diving head first into the entrees.   Kat decided to heed our helpful waitress’ advice and order from the specials menu, which will soon become the New Fall Menu at Hat City, and went with the Braised Short Ribs whereas I could not help but order the Southern Buttermilk Fried Chicken.  Since our entrées came with a side dish each we chose to go with the Garlic Mashed Potatoes and The Collard Greens.

As we ordered our food, our first round of beers arrived and soon we were left to our own devices to enjoy the band that was about to begin their first set.  In no time I was transported back to that bar in Chicago, as the room transformed into a scene out of a movie.  That vibe that I had been longing for quite some time slowly creeped into the city of Orange that night, all thanks to Hat City Kitchen, and I loved every second of it.

Just when I thought this spot could not get any better, our first course arrived.  At first, when the dish arrived I was a little under whelmed.  As I am sure you can see from the photo, this crock full of mushrooms did not look like anything special.  Once again, I failed to mind my Grandmother’s wise words about never judging a book by its cover.  Upon tasting this bowl for amazing, I realized that the mushrooms were simply a vessel for the sauce that if sold at a grocery store could most definitely rock the label, Awesome Sauce.  This lemony, garlic concoction was not only on the mushrooms, but had absorbed into the mushrooms during cooking and created the perfect juicy bite.  I am not ashamed to say that I literally drank the sauce from the bowl.  Although the people sitting next to us seemed to be judging me as I sipped the ramekin like the Queen at high tea, pinky out and all, like the majestic honey badger, I didn’t give a shit.

As we finished our appetizer, we ordered another drink and once again allowed the band to make sweet, sweet, love to our ears.  Yup, I heard it as I typed it.  That was a weird, weird sentence. Sorry for that internets.  Anyhow, the entrees arrived and the sheer size of the dishes took us by surprise.  Both of our entrees were ginormous, and I am not going to lie, their girth combined with the aroma that was emanating from them made me one happy foodie. 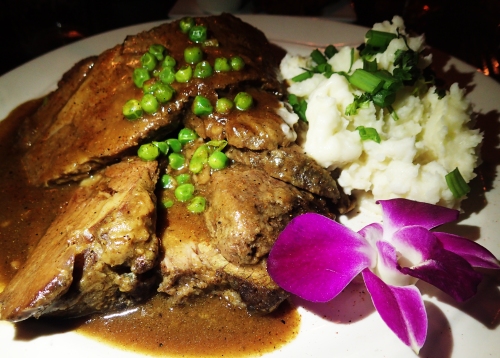 Nothing is better than a giant plate of meat!

We decided to dig into the Braised Short Ribs first.  The meat was fork fight tender, which is what I look for in a good Short Rib and cooked expertly.  Even though, the meat was phenomenal, once again the sauce stole the show.  Not to mention the fact that when I dipped the Garlic Mashed Potatoes in the gravy, I took a one way trip to flavor town! 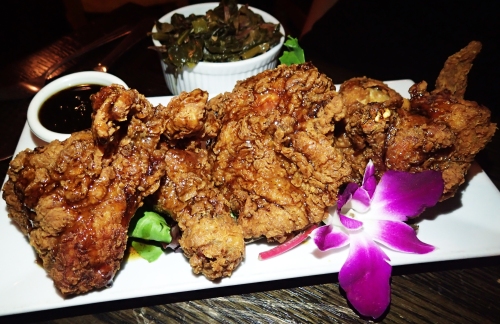 We then, at first reluctantly, moved on to the Fried Chicken and Collard Greens.  At this point in the meal I was starting to see a pattern.  The food at Hat City Kitchen is not only top notch, but it is drizzled, slathered, or swimming in dressings, sauces, or pastes that are otherworldly.  So, when I saw a small container of what appeared to be honey sitting next to my chicken I could not help but dip my fork in it and give it a quick taste.  I was not wrong to do so.  This bold, fiery, mixture was none other than homemade hot honey and it was glorious all by itself, but when paired with the juicy, dare I say the forbidden foodie word, moist, fried chicken, it was straight up tastegasmic.  Look at that chicken people!  Okay, stop looking, you are drooling on your keyboard and your co-workers are starting to wonder about you. 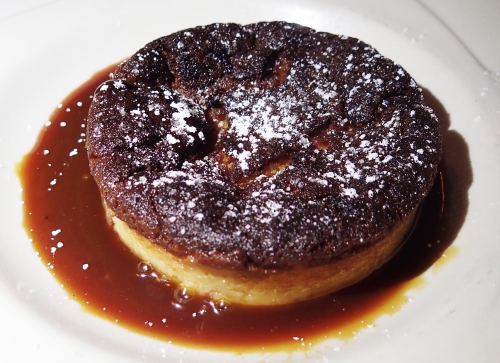 No Bread Pudding For Me, Said No Sane Person Ever!

Somehow we managed to eat all the food that was placed in front of us and just when we thought we could not fit one more bite of food in our mouths, the waitress came over and said the words that always seem to fix our stomach capacity issues, Homemade Bread Pudding.  Kat and I both locked eyes and lovingly, yet somewhat begrudgingly said “yes, please!,” in unison.  Do yourself a favor and order this sweet treat when you go to Hat City, it is a legitimate contender for best bread pudding I have ever stuffed in my craw!  This unique dessert tastes like bread pudding and creme brulee did it like they do on the discovery channel and had a baby.  Then of course, Hat City Kitchen, takes this wondrous hybrid and plates it with a sauce that is both decadent and divine.

The next time you are looking for a new place to eat, drink, and be merry I highly recommend you jump on the Parkway and head over to Hat City Kitchen.  From first dates to dinner with friends this spot can accommodate all.  I mean if you don’t like great food, lively music, and drinking beer then by all means sit at home in your recliner and watch PBS. However, if you still have a heartbeat and strive for something fun and exciting to do with your evenings, do yourself a favor and get your keister down to Hat City Kitchen, you won’t regret your decision.