If you are like most people, you probably enjoy nostalgia. It allows us to reminisce about times that we hold dear and memories that make us smile. Even though when you were living those moments you were inevitably thinking back to an even simpler time, ruminating about the past is always an amusing endeavor. This feeling of joy and serenity when recalling past occurrences is what makes Throw Back Thursday so much fun on Facebook. Well, that and the fact that your friend’s Mom constantly posts pictures of him at the age of 7, dressed up like Jem! #TrulyTrulyOutrageous!

A large majority of people tend to embellish and exaggerate stories from their past, even when discussing them with friends that were there as well. As the memory gets older the tale gets bigger and better, I call this phenomenon, Legend…wait for it…Darism. Think of a game of telephone, but everyone is in on it, slightly altering the story each time it is told, to make their past lives seem somewhat more epic.

Much like that abstract memory of the dude that ate his own dingleberry in college for a buck 25 and a loosie evokes the highest of high fives amongst friends, there are certain establishments from your past that will always arouse emotions of happiness. Unfortunately, these emotions are usually misguided by the aforementioned illness. That sandwich place with the best sandwich in the world when you were 18 was only good because it was two pounds of food for 3 bucks, and you were stoned; the band that you swore was going to be the next Beatles was called Sum 41, and that sentence sounds just as dumb now as it did back then; and the beer you drank in college was horse piss, and I don’t care if it won a blue ribbon in1893, it still tastes like the dingleberry our friend ate!

Rarely, however, you get the chance to return to an old haunt that exceeds your expectations of awesomeness, and this is what I experienced a few days ago. I was feeling nostalgic, so I suggested to Kat that we go visit our old watering hole that got us through college one beer at a time, The Shepherd & The Knucklehead Pub & Steakhouse, located at 529 Belmont Avenue, Haledon, NJ 07508. Kat must have been feeling sentimental too because she instantly agreed, and we were on our way.

Welcome to the Shep!

I am well aware that The Shepherd & The Knucklehead should have been posted on this blog a long time ago, since they have been making waves in the local craft beer market for a while now. With 90 microbrew taps, a menu that would make any foodie squee, and an atmosphere perfect for a laid back beer snob like myself, I have somewhat failed my audience and this establishment by taking this long to visit what was once my go to bar. My explanation for this monumental gaffe is quite simple; I was petrified I would not like it. I was nervous that the bar that existed in my head that was connected to so many wonderful memories was going to be tarnished by what the bar had become.

To make a long story short, I am an asshole. The Shepherd & The Knucklehead is not only as good as I remember, but it is even better. Their beer selection is second to none in this area, if not in this state. Did you read the sentence above? That was not a typo, 90 Mircrobrew taps that are constantly changing as they kick. The beer menu for The Shepherd & The Knucklehead is almost as thick as the menu for the Cheesecake Factory! Furthermore, the wait staff and the bar tenders actually know what they are talking about when it comes to craft beer, so if you can’t decide exactly what to drink, they will talk you down off the ledge and make sure you choose the right beer. 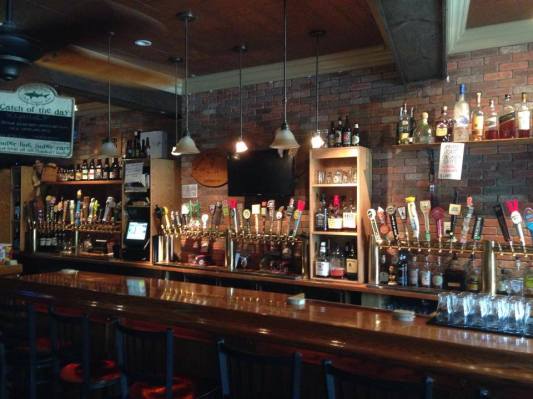 …And this ain’t even all of them people!

It took us some time, and some serious deliberation, but eventually Kat and I were able to choose our first beer. While we awaited its thirst quenching arrival we perused the food menu. The Knucklehead’s kitchen offers a variety of food options for the different social situations that could occur at a bar and/or a restaurant.   There are quite a few appetizers that are perfect for sharing amongst the table if you and your friends get a little noshy during your stint at the bar, such as the Knuckle-head sized Wings, The Shep’s Pork Poutine, or the Beer Mussels. If you are a bit hungrier, are a germophobe, or just a selfish twit, they have a myriad of soups, salads, wraps, burgers, and sandwiches, such as a Half-Pound Angus Burger, BBQ Pork Sliders, a Philly Cheeseburger Wrap, and even a Vegetable Curry Wrap for you veg-heads.

However, if like me, you were on a date of sorts and wanted to dine on something a little more refined, have no fear the Shepherd has you covered. After some serious hemming and hawing, I decided to order the Shep’s Paella which was described as Shrimp, Mussels, and Chorizo served over saffron rice; whereas Kat did not think twice about ordering the 12 oz. NY Strip topped with Bourbon-glazed onions paired with Mashed Sweet Potatoes and Broccoli Rabe.

With our orders placed and our beers at the table, we were free to reminisce about the small hallway of a bar that the Shepherd and The Knucklehead used to be. Back in the day when we would open and close this small local tavern they had 20 taps and no food. Yet we kept coming back. Why you ask? The atmosphere was amazing. There were board games you could play, books that adorned the walls begging you to read them, a dart board, craft beer, and some of the nicest drunk people you would ever meet. It was a Hippie bar through and through, all the way down to the cardboard sign that hung on the wall that read, “If you yell or anything no coming for 2 months.”

By the way this sign can still be found on the Shep’s website, which leads me to believe that they agree with the wise words of H2O, Don’t Forget Your Roots!

Funny thing about The “New” Shepherd and The Knucklehead was it felt the same, just larger and more spacious. There were still board games, books, craft beer, and great people, but now there was food and room to roam like the free range hippies we always wanted to be.

While Kat and I continued to go story for story about The Shepherd and our college years like prized fighters, we could not help but bask in the wonderful feeling of being home. You know the feeling I am referring to. That sensation you get after traveling for an extended period of time, when you walk through your door and are greeted by your animals and splash into your own bed. The calming and friendly atmosphere that we fell in love with at The Shepherd & The Knucklehead all those years ago, surprisingly is still alive and well. I was ecstatic to see that even though the walls have been expanded, The Shepherd still feels cozy.

Meanwhile, as Kat and I were bar dreaming, the kitchen was apparently working fervently to prepare our meals because in no time our meals were being placed in front of us. As the food was being placed down, the delightful aroma of our entrees sent food chills down my spine, which elicit similar symptoms to the douche chills you get from seeing Bryce Harper, but are much more enjoyable.  I almost could not wait to dig into my meal, but alas, I have to make sure to get the perfect food porn shots, and of course another beer had to be ordered. While I was snapping photos our waitress was kind enough to help us pair our dinner beers perfectly with our meals.

Look at that sear!

After the obligatory photographs were taken, we slowly but surely devoured our dinners. I, of course, got to taste a portion of Kat’s entree because she is the best foodie wife ever! Not only was her steak expertly seasoned but check out the preparation. This masterpiece had the perfect cross pattern sear which gave the outside of the steak an amazing char broiled taste, while the inside… well see for yourself. I assure you it tasted just as good as it looks in this photo; it was juicy and absolutely delicious.

I don’t care if foodies don’t like this word to describe food, this steak was f-ing moist!

I also was afforded the opportunity to try the side dishes that Kat ordered. The Broccoli Rabe was not immensely bitter but still had the tried and true minor bitter bite that a fan of the side dish looks for. Furthermore, the texture and seasoning of these veggies was spot on, and I am convinced the Chef must have had a Nonna that taught them to respect the Rabe. I will confess that I am a sucker for sweet potatoes. So, I may be a little biased when I say that I thoroughly enjoyed the Shep’s mashed sweets but Kat seemed to like them too considering her plate was clean by the end of the night.

Paella may be hard to spell, but this dish was easy to eat.

After taste testing Kat’s wonderful meal, I was nervous that I was going to have food envy. That is until I took the first bite of my Paella. Holy freaking flavor country Batman! The saffron rice was tender and extremely tasty thanks to the world’s most expensive spice, proper cooking, and the deliciously spicy chunks of magnificent chorizo that were floating around in this dish like savory depth charges. Furthermore, the mussels were some of the best mussels I have eaten in quite some time, and I have had some pretty serious muscles, my friends. Not only were they flavorsome, but the consistency was perfect, not a hint of rubber to be found. The entire dish was a fantastic marriage of flavor, texture, and aroma, so much so I forgot Kat’s dish even existed. Okay, that might be an exaggeration, her steak was freaking awesome!

I am pleased to say that my preliminary trepidation was completely unsubstantiated, and The Shepherd & The Knucklehead Pub & Steakhouse remains a force to be reckoned with in the Craft Beer Nerd Realm. Furthermore, they have now broken into the foodie world as well. If you are looking for a serious Craft Beer spot with a menu to match, I highly recommend you come visit The Shep. The nicest thing about going there for dinner is when you are done eating; you can retire to the bar and have a nice nightcap without even stepping outside. Considering we live in the good ol’ Garden State, I feel obligated to quote Bon Jovi here, Who Says You Can’t Go Home!