As I get older there are more and more things that I miss from my youth.  Besides the fact that a hangover that used to last 2 hours, now lasts two days, and in the morning, my bones and my cereal sound like they are having a conversation as they both snap, crackle, and pop.  One such component of my youth that I never thought I would miss is oddly enough school.

I am now almost certain that time travel will not be invented during my life time, because as I just wrote that sentence, a 6 year old with a scraggly bowl cut and a 15 year old rocking JNCOs and a chain wallet didn’t just appear in a DeLorean and take turns kicking my shins.

It is not actually school that I miss, but the learning that accompanied it, because let’s be honest only like 42 people in the history of mankind actually liked high school when they were there.  This perpetual thirst for knowledge is very similar to my thirst for beer on a Thursday night, as in, it is very hard to quell.  Shut up, maybe you have a problem!

Since I still haven’t truly decided what I want to be when I “grow up”, I have yet to choose a Master’s program that I can truly torture my brain with, and so I seek education in unconventional places.  Not to mention, my current chosen path to knowledge is a hell of a lot cheaper than going to grad school.

This time around, my never ending quest for knowledge steered me in the direction of another thing I miss from my youth, The Mall!  That is right, I grew up in Northern New Jersey in the 1990’s, which means that I was a Mall Rat.  Not just any Mall Rat mind you, but a Garden State Plaza Mall Rat; GSP Represent!  Back in my day, the mall you called your home was important and any other rat from any other mall wasn’t even welcome in your hack circle.

Sorry, I veered off course there for a minute.  Anyway, back to my journey.  The interwebs informed me that at my former stomping ground, an eatery that I have written about once before, Yo! Sushi, was now offering a two-hour comprehensive Sushi School.  I was interested, I was intrigued, I was… concerned about the cost.  I subdued my excitement, while I clicked some links and skimmed some sites, all the while worrying that this class might be out of my price range.  Then I saw it. 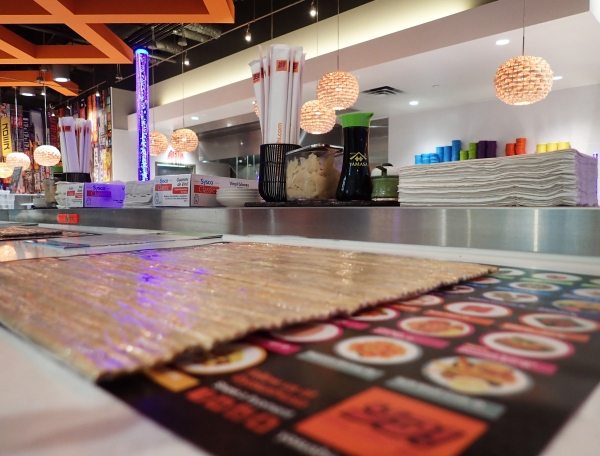 Our work station for the night.

How much is Yo! Sushi charging for this class you ask?  $30 for a single student and $49 for a pair of pupils.  This is not my first time dabbling in the dark arts of back alley cooking classes, so I know what some of them cost.  I once took a wine class in the city and even with a Groupon it cost me $45 bucks a person, and I left more sober than a 15 year old trying to buy booze with a fake ID that was made with MS Paint and an Ink Jet printer.  The how and why Yo! Sushi is pulling off this price point matters not, I only know they are, and I was in!

Here is how this class works.  Each Sushi master in training is provided their own rolling mat, gloves, recipe cards and ingredients, and a YO! Sushi head chef will walk you through the process of creating all different types of Sushi.  The syllabus includes, making sushi rice; cutting fresh fish; and mastering the best techniques for rolling maki, mini iso and hand rolls.  As the late great Billy Mays used to say, “But wait there is more!” once all dishes are completed, students will leave with their rolls, along with a recipe book, a certificate, and a special discount voucher for their next visit.  Not to mention if you are as my wife lovingly puts it, a competitive jerk, after you learn your new skills you can put them to the test against the rest of the class by participating in the Yo! Sushi Rolling Challenge.  The winner gets a $10 gift card, a spot on the in-store leader board, a shout-out on the Yo! Sushi Instagram page, and best all BRAGGIN’ RIGHTS!

Sounds great, right?!  I am not going to lie, I was skeptical too.  Even more so when our Sushi Chef came out to the table and introduced himself to us.  His name was Stuart, and he was definitely not from Japan.  He was actually from Scotland as we learned once he began to speak to us.  However, after about three minutes into the class we realized it was not the nationality of the chef that mattered, but the passion that he brings to the cutting board.

Stuart not only knew his stuff, but to use an often uttered 90’s colloquialism, he had the mad phat skills to pay the bills.  As he waxed poetic about the history of not only Yo! Sushi but Sushi in general, he demonstrated an array of knife skills that would make a samurai weep.  He went on to explain how to choose the fish you use, how to prepare it, and he also shared the secrets to the most important element of any great Sushi, the mystical rice.  Within the first 15 minutes of the course, Stuart’s extensive knowledge, skills, charisma, and overall teaching method had quelled my hesitation about the class, and I was excited to get my hands dirty.

“Wisdom is not a product of schooling but of the lifelong attempt to acquire it.” -Albert Einstein

As if Stuart read my mind, he began doling out the ingredients for our first roll. Stuart guided the class through each and every step of the process, making sure that our Sushi somewhat resembled the masterpieces that he was creating.  This was no easy task, because my hands were meant for catching footballs and carrying heavy things, not for Sushi making, but somehow he made it work.

Hands off my Sushi! Get it… Cause it is a Hand Roll… Come on, everyone appreciates a good Dad Joke!

Each and every type of Sushi that we created not only came with instructions but also a brief history lesson or anecdote that made the class that much more enjoyable.  Throughout the class, you could tell Stuart was not using a script from a corporate Power Point, he was simply talking to us, while he was teaching us.  He even added some war stories from the Kitchen which are always fun to hear. 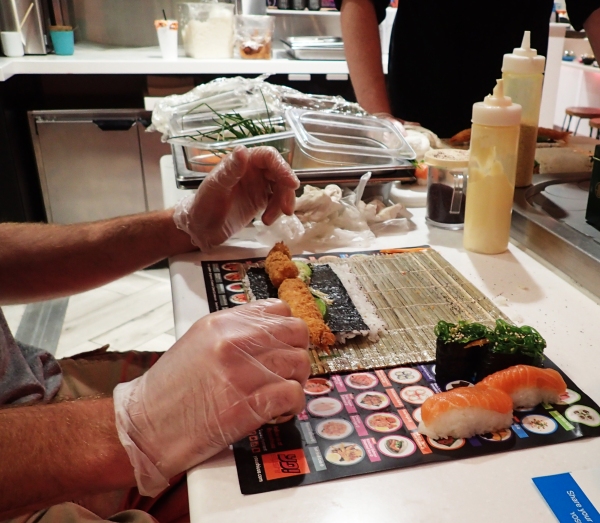 Rollin’ with my Homies!

As we were jumping from Sushi type to Sushi type, Stuart stressed that this class was not simply about learning how to make the Sushi that we were preparing today but gaining a skill set that will allows us to use our imagination in the kitchen.  After the completion of this course, you could follow the recipes on the cards that Yo! Sushi provides, or you can use any ingredients you can think of to make whatever concoction your heart desires.  Once you “perfect” the art of slicin’, dicin’, and rollin’, the world of Sushi is yours to explore.

Much to learn you still have…my old padawan. … This is just the beginning! – Yoda

As we made our last roll, Stuart collected all of our creations and began to cut them.    As he went through the cutting procedure for each style he described the theory behind each cut.  I am not going to lie, while he was doing this, I got a serious case of knife envy.  I don’t have crappy knives mind you, but compared to the hardware Stuart was wielding, I might as well be brandishing a shiv that I fashioned out of a toothbrush.

Now that is a doggie bag!

As promised, our extremely fresh and somewhat amateurishly made Sushi was cut, boxed, and ready to go at the end of the class, thanks to Yo! Sushi and Head Chef Stuart Foster.  As we prepared to leave, we discussed the implantation of this new found culinary skill.  Imagine instead of pigs in a blanket and pizza bagels decorating your dining room table at your next gathering, an assortment of freshly made Sushi.  The best part is, you don’t have to be a master Sushi Chef to pull this off, the effort alone is going to get you plastered on every Instagram, Facebook, and Snap Chat in the house.

That is some fine ass fish!

When all was said and done, Kat and I left Yo! Sushi with head full of knowledge and a bag full of Sushi, ready to put our newly acquired skills to good use.  If you are a foodie who enjoys putzing around the kitchen, this is a great way to bolster your culinary aptitude, while not spending a gill and a fin.  Furthermore, if you have someone special in your life who shares your passion for all things palatable, you would be hard pressed to find a better date night that would offer more bang for your buck.