Missy’s Main Street Cafe Is What New Jersey Breakfast Is All About!

I consider myself a nomadic gastronome, meaning that although I truly heart the Garden State, I will forever roam the planet in search of amazing regional fare. Not just by car either people, I have been known to base entire vacations around a particular type of food, that I could seriously have delivered to my house in 15 minutes, simply because the internets says it is better in some random state. I understand it is a sickness, but I hope they never find a cure, because my wife and I have had some amazing adventures bouncing to and fro from unheralded eateries, roadside stands, established restaurants, dive bars, and on one startling occasion a chance encounter with a gas station mini-mart that served us a hamburger that I still have wet dreams about. To paraphrase the proclaimers, I would walk 500 miles, and I would walk 500 more, just to be the man who walked a thousand miles, to chow down at some random store.

With that said, during my gastronomic walkabouts I tend to catch a craving that can only be quenched by my beloved home state. New Jersey may smell like death and cheese and have more D-bags per capita than most states in the union, but there is one thing that we do right in Dirty Jersey, and that my friends, is Breakfast. I ain’t talking about the B.S. that the fly over states call breakfast either, with their Denny’s and their IHOPs. Denny’s might be America’s Diner but that is only because they don’t’ got what we got, and it ain’t corn. Jersey is peppered with classic Diners, mom and pop pancake shops, and eclectic Cafés that serves the type of breakfast that makes you want to take a nap shortly after finishing your 12th cup of coffee.

When I return from an extended epicurean exploration, I long for a true New Jersey breakfast like musicians yearn for a time before American Idol. Recently, I went on a Ramen bender, which lasted longer than I would like to admit, and included three states. Full of broth, salt, and embarrassment, I reentered New Jersey with breakfast on my mind. A simple diner would not fix my sodium-laden, yet bourbon driven hangover. I knew I needed something special, and then it hit me. I felt the need, the need for Missy’s!

Missy’s Main Street Café is located at 181 E. Main Street in Rockaway, New Jersey. Missy’s is the type of place that once someone declares their intentions to go there, there is no discussion. Everyone just accepts they are going and finds themselves driving in a car dreaming about the glorious food that they are about to cram into their talking holes.

Trust me, the food is amazeballs, but we will get back to that. I feel like I must first discuss the ambiance and atmosphere of Missy’s Main Street Café to explain just how remarkable this place really is. When you enter this establishment you feel like you have gone back in time, and not in the holy crap dinosaurs, kind of way, but in the warm, fuzzy kind of way. Missy’s has a home town feel that chain restaurants try to imitate but simply can never duplicate, no matter how many pieces of fake local high school memorabilia they can nail to their walls.

The Wall of Fame

The best part is, Missy’s exudes this charm, without seeming like they are trying to. From their smiling servers that never come off phony to the picture wall that portrays their regular customers, Missy’s simply is a home town café, which is why it feels like one. Not to mention that once a week they select a customer to create and name a special that will be featured at the restaurant.

First off, Missy’s Main Street Café’s Menu is chock full of word play, which I find hilarious. Veloci-Wrap-Tor! Get it! Get it! Come On… Screw you… that is funny. Stupid Internet… Anyway, if there is one thing I like better than a good pun it is food, and this joint has that too. On this occasion I decided to get the Doc’s PB&J French Toast with a side of Bacon, Kat went with a Western Omelette paired with home fries and our friend Rory went with a breakfast wrap from the specials menu. How about, Gansta Wrap… Still nothing… I hate you guys.

While we awaited for our food we soaked in the scenery, chatted with our waitress, people watched and even though Missy’s was bumping, we relaxed and enjoyed our Sunday Morning. Something about this quaint café just allows you to forget about the chaos that is happening all around you and ponder the most important things in life, like wondering how many strips of breathtaking bacon will Missy serve me today!

When our food arrived, my train of thought was derailed by the fantastic sight that was my meal. The plate that was placed in front of me exemplified why states like Minnesota can never beat New Jersey in a Breakfast brawl. Sorry, Minneapolis, but Rockaway just pulled out a shiv made out of French toast, peanut butter, and jelly and made Saint Paul an only child.

Look at that decadent pile of awesomeness and ask yourself why the hell you have never had this in your life. It was not as sweet as it looks, which was a surprise, but it was as tasty as it appears. The toast was toasty, the peanut was peanut buttery, and the jelly was straight up legit! All together these components teamed up to make a sandwich that was not only memorable but damn near orgasmic. 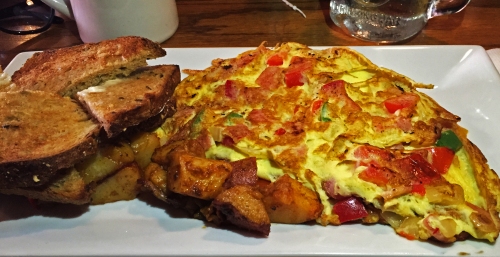 When Kat ordered her dish, I thought that it was kind of Katish, I mean with the menu this place is rockin’ an omelette is one of the last items I would choose. However, this was a serious omelette! It was a flawless combination of fluffy, flavorful, and scrumptious. Every bite was chock full of ingredients that were hand picked to not only be appealing but delivered an explosive appetizing experience with each and every forkful. 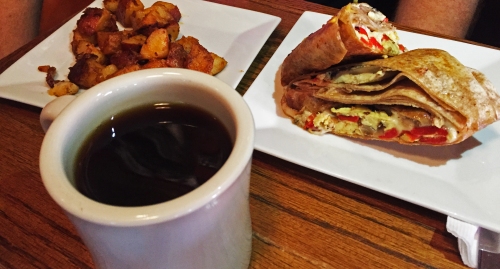 Rory went with a special, which is the usual method to my madness so I respected his gumption and he appeared to make the right decision. Although I did not get to try taste his meal, because it would have been weird to ask, it looked amazing and he seemed to like it a lot considering there was none left by the time our breakfast was over.

And then… Then there is the bacon. Bacon so perfectly crisp and delicious that one would think there is a farm behind Missy’s. Where this salty, fatty, yummy comes from may be a mystery but I assure you that it is magical. So magical that one might think these angelic strips of crazy come not from pigs but from the last blessing of unicorns that roam this wonderful planet.

Missy’s Main Street Café serves lunch as well, which I also thoroughly enjoy, but TBH it is their breakfast that keeps me coming back, time and time again. Not to mention that visiting this fancy as fuck greasy spoon is like eating at Grandma’s house. That is, if my Grandma knew how to cook like a boss and had a shit ton of bitchin’ tattoos.