Occasionally the fact that I have a food blog comes up in conversations and when it does I typically get mixed reviews, pun intended.   Some people respond to this statement as if I just told them that I kick dogs for fun, while others reply as if I had told them I write for the New Yorker.  Although, I tend to enjoy the latter as opposed to the former reaction, by far my favorite response is also the most common; “That is, (Insert Favorable Adjective Here), you should really check out, (Insert Restaurant’s Name Here).”

This is exactly what happened a few weeks ago while I was at my local watering hole, The Twisted Elm, and ran into a few old friends.  One of them was unaware that I write this blog and as soon as I mentioned it she instantly began throwing names of restaurants out faster than I could digest them.  As I fervently tapped on my phone with my giant clumsy thumbs, trying to capture all the potential Blue Collar eateries that were being hurled in my direction, one seemed to stand out amongst the crowd, Charlie Blood’s Restaurant.  Not only was the name appealing but the way she described this joint lead me to believe that it was right up my alley.  She may or may not have used the phrase Dive Bar a few times. 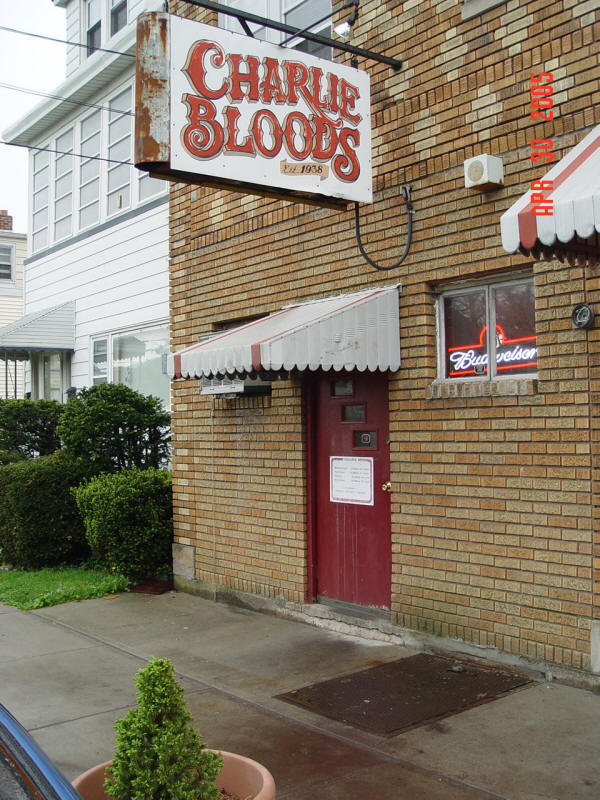 The following night Kat, our friend Rory, and I embarked on our culinary quest to Charlie Blood’s, which is located at 147 Frederick St., in Garfield, NJ.  As we pulled up to what I assumed was the front of the building, more on this later, I could feel the blue collar vibe emanating from this establishment.   The yellow brick of the building illuminated by the welcoming glow of the neon beer sign in the window attracted Rory and I like a tween to sparkly vampires.

Upon entering Charlie Blood’s Restaurant we were whisked away to a wondrous world of wood paneling and draught beer, that I lovingly call DiveBaria.  This extraordinary land is a lot like Narnia from the acclaimed novel, The Lion, the Witch and the Wardrobe, except that the Wardrobe is a bar, the Lion is food, and instead of a witch there is beer.  Come to think of it, there are really not any similarities between these places, except of course, they are both magical.  Once inside, we grabbed a table adjacent to the bar, ordered a round of drinks, and asked for a few menus. 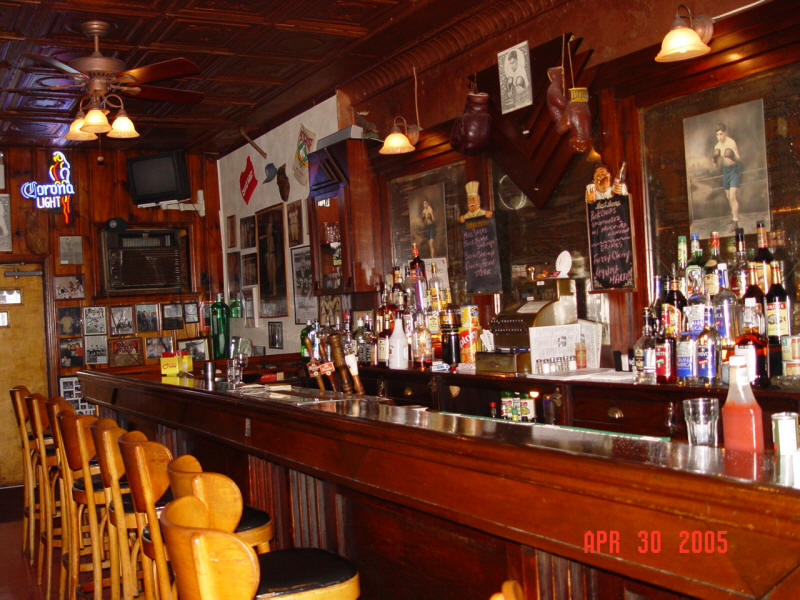 While we swigged our first round, we discussed the menu and conversed about the astonishing selection of food that this seemingly unimposing tavern has to offer.   Even though Charlie Blood’s offers a wide variety of Italian American fare, my mind was made up the second I picked up the menu and saw “The Duke’s” face staring back at me.  The Duke is Charlie Blood’s Famous 24oz Ribeye Steak and I felt obligated to my readers to conquer it, especially since it was only $17.95.  Kat opted to attempt to keep her girlish figure, which this blog does not help at all, and ordered the 12oz steak for $11.95, while Rory went with the Seafood platter, which is described as Shrimp, Calamari, Mussels, and Baked Clams for $14.95.  To add to the affordability of this spot, all of our meals came with a house salad and fries as well.

After the hardest part of the evening was over and our food ordered, we took our beverages in hand and drank in all that this restaurant has to offer.  The walls of Charlie Blood’s restaurant are covered from floor to ceiling with local sports memorabilia and hometown heroes.   I am not talking about the kind of crap that is draped all over the walls at your local Applebee’s, that was clearly professionally framed and placed there by a decorator either, I am talking about  the genuine article.  A large poster of this establishment’s namesake, Charlie “Blood” Benanti, hangs in the bar alongside this memorabilia. 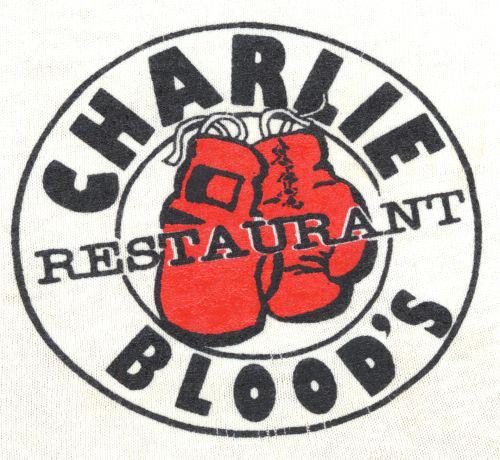 According to the Googles, “Charlie gained his nickname “Charlie Blood” at a young age from his reputation as a street tough fighter during his school days. He began professional boxing at the age of 16 to aid his family in the pre-depression years. Many of his fights were held in Garfield, Jersey City, and Paterson.  He gained the New Jersey Lightweight crown in 1928. With a winning record of 65-5, he retired in 1931. In 1940, Charlie took over a tavern in Garfield from his father-in-law and is now owned and run by his son Sal Benanti, and his family.”

Our salads arrived and I have to say I was impressed by the portion size.  That is not to say that the salads were over sized but they were not overtly petite either.  To paraphrase a famous blond girl who broke into a bears house, it was not too big or too small, but just the right size.  The actual contents of the salad appeared to be fresh and as far as a dinner salad goes, it did its job flawlessly. 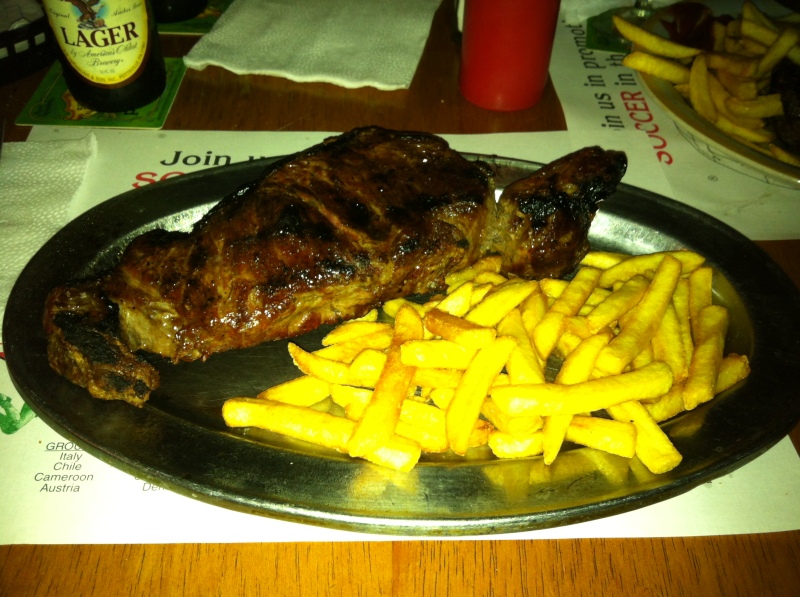 With my appetite intact and properly primed, I was ready to go round for round with The Duke.  As this 24oz beast of a steak came to our table the theme song from Rocky was playing in my head.  I have never met a steak I could not finish and I was determined to make sure that the Duke was not the first.  So far Charlie Blood’s Restaurant was not disappointing this blue collar foodie, but as the first forkful of steak was slowly approaching my craw, I knew that the moment of truth was upon us.  For, a cheap bill is not the only requirement for a restaurant to be Blue Collar Foodie approved.   But alas Charlie Blood’s Restaurant did not dissatisfy, it was love at first bite. 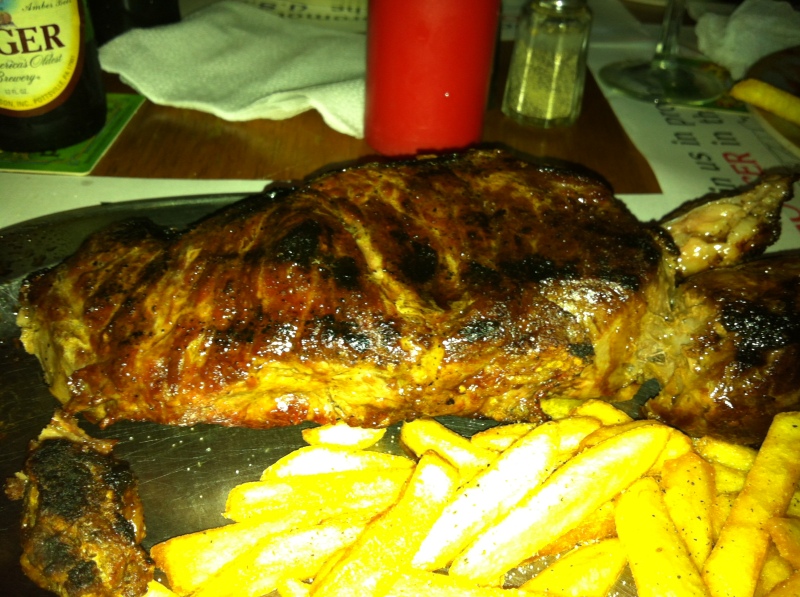 This colossal slab of cow was perfectly cooked, medium rare, and seasoned just enough to enhance the natural flavor of the meat.  This was one of the best steaks I have had in a long time, and I could not believe that I was having it at a place like Charlie Blood’s Restaurant.  Kat and Rory seemed to be enjoying their meals too, considering the conversation that we were having when the food arrived had not only stopped but was only a distant memory.  As I finished my steak, I found myself sopping up the juices with my French fries so I would not waste any of the deliciousness. 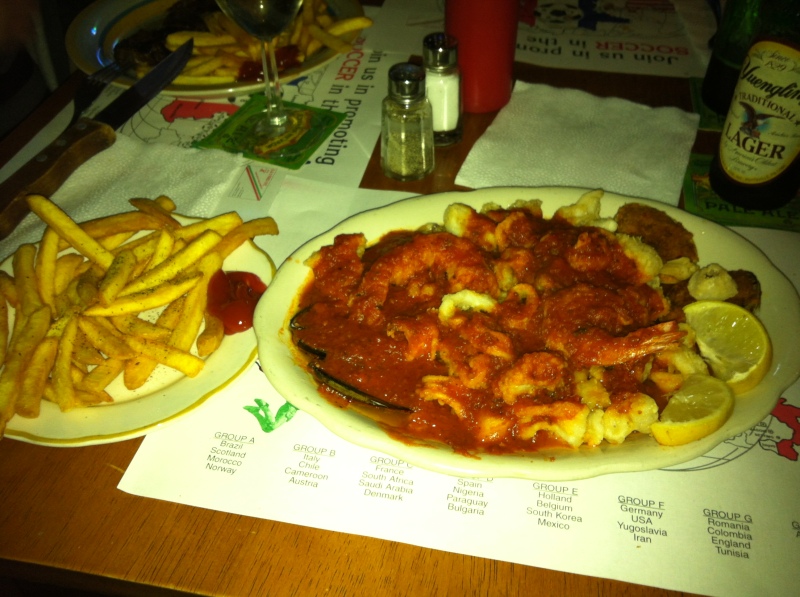 All in all, Charlie Blood’s Restaurant is the perfect two punch combination, it is affordable and the food is terrific.  This is yet another establishment that makes you hear your wise mother’s voice urging you not to judge a book by its cover, in that motherly tone that we all love to hate.  These hyper local Blue Collar foodie havens are difficult to find and get harder and harder as the years drag on.  There is something extremely comforting about Charlie Blood’s, a Cheers’esque’ quality, that is sadly endangered nowadays.

There are a few notes about Charlie Blood’s Restaurant that I wish I knew before we visited that I will now share with you.  This blue collar foodie find, much like many others, only takes cash.  They do have an ATM on site, but if you want to save the fees stop at the bank before you head over.  Furthermore, if you are not into eating at the bar, I have been told that there is a full service restaurant side to Charlie Blood’s Restaurant that I will be checking out on our next visit.  The entrance to the restaurant is apparently around the corner from the door we used to get in.