New Jersey, in general seems to be everyone’s least favorite state, and to be honest our bulbous surly governor and the entire cast of the Jersey Shore does not help our cause. With this said, there are a few things that New Jersey is not only known for, but dare I say it actually loved for. First and foremost, we have Taylor Ham and you don’t, and if you are from this area you know all about this flavorful salty pork puck, that former Jersians crave so much, they have to make a yearly pilgrimage to a true New Jersey Diner just to get their fix. Secondly, New Jersey supplies its residents with bagels that are so damn tasty that no one seems to notice that this popular breakfast treat has about as much nutritional value as tree bark wrapped in bacon. Lastly, and at least in the context of this article most importantly, New Jersey is home to the BEST PIZZA IN THE WORLD! Calm down, New Yorkers, I can hear you cursing me out from across the G Dub, you are a close second, and seriously you are New York F-ing City, you beat us in every other category from Architecture to Zoos, so please let the red headed step child of the union that is New Jersey have this one.

Now that I have thrown the gauntlet down and expressed my love, no, obsession for New Jersey Pizza, and basically lost all of my readership from New York and Pennsylvania, I feel that I might as well further alienate myself, and piss off the New Jersey folks too, by proclaiming, in my opinion, which Pizzeria is slinging the best slice. Now, by making this statement I am breaking my own rule, which states one should never start a conversation which is bound to turn into a debate, and ultimately into a no holds barred battle royal, by bringing up politics, religion, or Pizzeria Prowess, but I have decided to throw caution to the wind and shout my declaration from the roof tops, or at least from the top of your internet browser. As I write this, I am anticipating a crap load of hate mail from every Tony, Don, and Horatio that trolls around the internet looking for blogs to flame, but remember first place is a lot like the Highlander, there can only be one, and this foodie, unlike our society today, does not hand out participation medals, so send your nasty grams somewhere else. Now without further ado, I, The Blue Collar Foodie, from atop my virtual soap box, proclaim, with the entire internets as my witness, that BIMS Pizza, located at 618 E. Main St. in Millville, NJ, is the indisputable champion of the Pizza World. 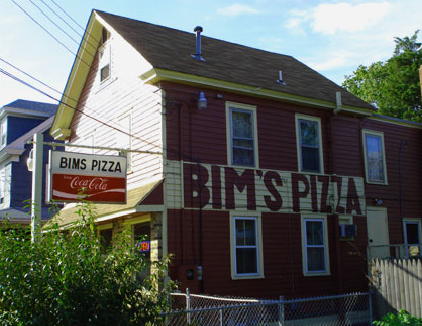 As you enter BIM’s, which stands for Best In Millville, you will be greeted by Joe Pierce, owner, Chef, sole employee, and story teller extraordinaire who has been tossing pizzas around Cumberland County for over 35 years. This house, turned pizza shop, is literally a one man show, and Joe Pierce has been there from the beginning, taking orders, and making pizza. Surrounded by a seemingly endless army of conveyor belt frozen pizza shops that are taking over New Jersey towns much like the outlaws did in the Wild West, Joe, like a modern day Pizza Sherriff, remains persistent and dedicated to making fresh, consistently fantastic pizza for his loyal customers on a daily basis.

BIM’s is not like your ordinary pizza shop; they don’t make chicken wings, meatballs, sandwiches, or salads, hell they don’t even sell slices. What they do sell, however, is a pizza pie in several sizes that is made fresh to order, using homemade dough and sauce which is made daily on the premises. Even though Pizza is all you can get at BIM’s that does not mean you can’t customize that pizza to experience a new BIM’s masterpiece each and every time you visit. They offer the following toppings that can be added to your pie for a nominal fee; Extra Cheese, Double Thick Crust, Pepperoni, Sweet Sausage, Mushrooms, Sweet Green Peppers, Anchovies, Onions, Bacon, Black Olives, Broccoli, Tomato, Garlic, and Hot Peppers.

The Pizza at BIM’s is so damn good that I travel two hours and thirty minutes just to eat a few slices, before heading back to North Jersey until the craving strikes again. BIM’s expertly prepared pizza has many levels of perfection that when combined create a pie that is out of this world. Like all pizzas the first level, and the canvas to this piece of artwork, is the crust. BIM’s pizza is constructed on fresh hand-made and hand-tossed dough that when cooked crisps to just the right amount of awesome. Piled on top of this righteous crust is a home-made sauce that balances between sweet and savory flawlessly, and then Joe invites not one type of cheese, but two to join the party. This combination of cheese and sauce eventually turns into a masterful blend of gooey yumminess once the oven has done its magic. The result is a pizza pie unlike any other, because all the recipes are a Pierce family secret and therefore cannot be duplicated, believe me I have tried. 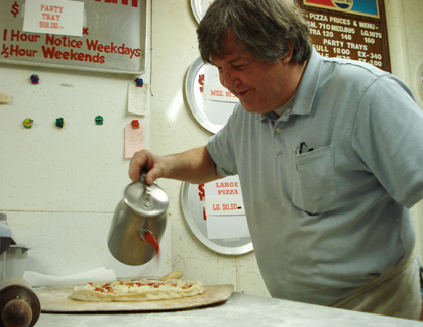 If you plan on visiting BIM’s you will not only get to taste the single greatest Pizza to ever grace the inside of a Pizza Oven, you will also get to meet and perhaps even hear a story or two from Joe. Much like the small business owners of yesteryear, Joe, embraces the idea of customer service and actually enjoys what he does, including interacting with his customers. Whether the conversation is about Millville, The Phillies, The Eagles, fishing, or life in general, Joe has a way of simplifying things and imparting wisdom about virtually any topic, like a zen pizza making life Sherpa, all the while continuing to take phone orders, toss dough, make pizzas, and restock extras. Joe epitomize the ethos of what a small business owner used to be and in a world where this style of business ownership is dwindling to damn near extinction, it is great to see that some people refuse to allow it to disappear forever. 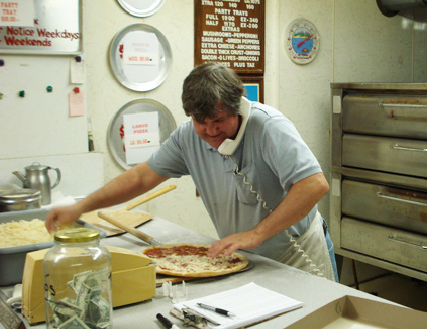 Attempting to explain the wonderfulness of a BIM’s pizza is much like trying to describe the Mona Lisa to a blind person. A person without sight, might mistake this extraordinary painting for just another portrait of a female, just as one might look at a BIM’s pizza and merely think that it is just another mundane pie. If, however, through the miracle of science that very same blind person’s sight was somehow restored, they would easily see that it is the intricate detail that makes Mona a true work of genius. Luckily for you though, you don’t need scientific intervention to have the same realization about BIM’s pizza, you only have to taste it to see the light. I assure you that after that first bite, you will be hooked on BIM’s like The Blue Collar Foodie is addicted to Bacon. 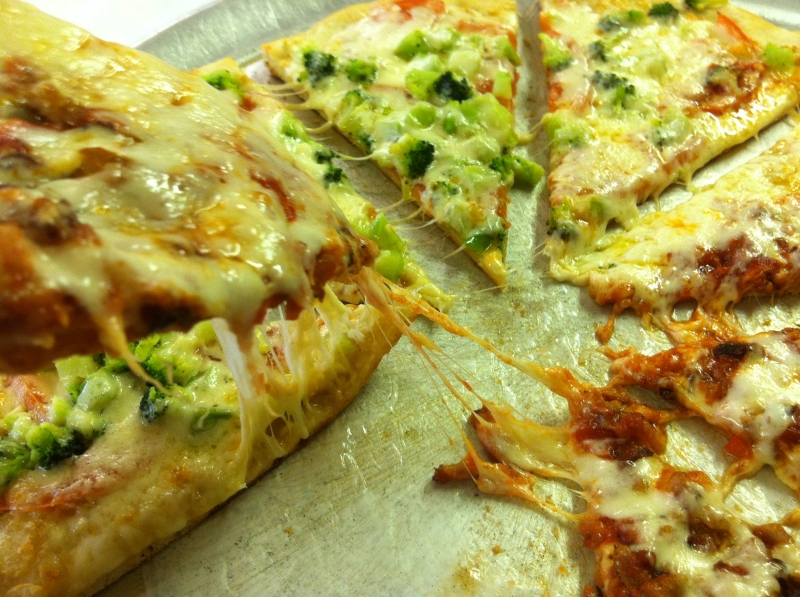 There are a few things you should know before you go to BIM’s Pizzeria. As stated before this establishment is an epic one man show and the operating hours reflect that. BIM’s is open Wednesday to Sunday from 4 P.M. to approximately 10 P.M. Furthermore, BIM’s is a cash only restaurant, so leave your plastic at home. Lastly BIM’s does not have tables, so in order to eat your remarkable pizza pie you must pick it up and go elsewhere or get it delivered to your house.

BIM’s motto is,” We specialize in pizza because pizza is the only thing we make,” which can be found on their menu as well as a sign that hangs in the shop. This phrase scares some people off, because they want variety but I suggest that you embrace this unique singularity. BIM’s does not have 101 different items on the menu because Joe concentrates on his one true passion, Pizza, and anything else would only distract him from creating the best Pizza Pie on the planet! 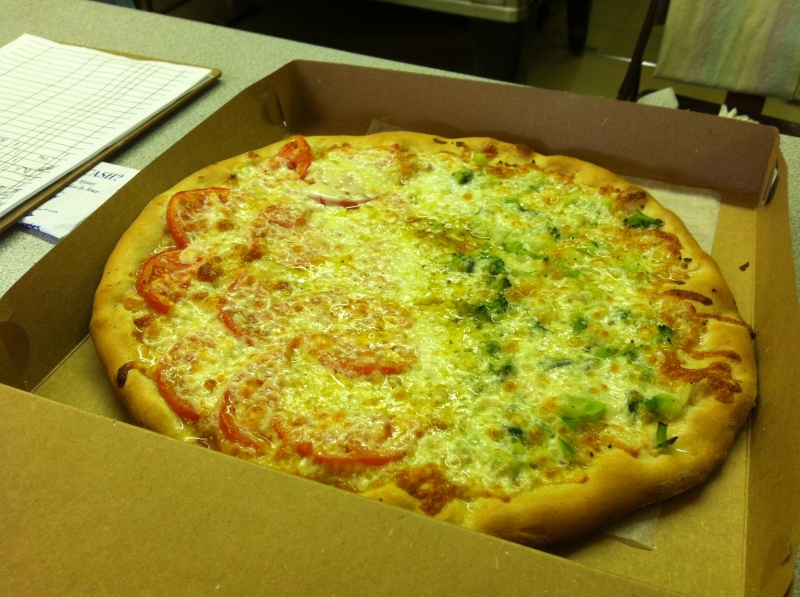 Damn That Is Pretty!

Leave a Reply to The Blue Collar Foodie Cancel reply