One of my favorite aspects of being a food blogger, or Gastronomer, is the fact that I get to chat about food all the time.  Food is something that I can talk about for hours on end and never get tired of telling tales of the perfect steak I once had in Nebraska, the greatest hot dog I ever ate in Chicago, or the time I ate nothing but meat at a Brazilian Barbecue spot in Newark for three hours straight.  These conversations usually lead to an enjoyable night of drinking and reminiscing, but they sometimes result in a wonderful payoff for this aspiring epicurean author.  In the midst of participating in these hedonistic, often embellished, tit for tat dialogues, if I am lucky one of the contributors might bring up a new restaurant that is not on my foodie radar.  When this happens, I can’t help but get excited because I have been doing this for quite some time now and finding eateries that inspire me is about as easy as combing the desert, for a princess, with an afro pick. 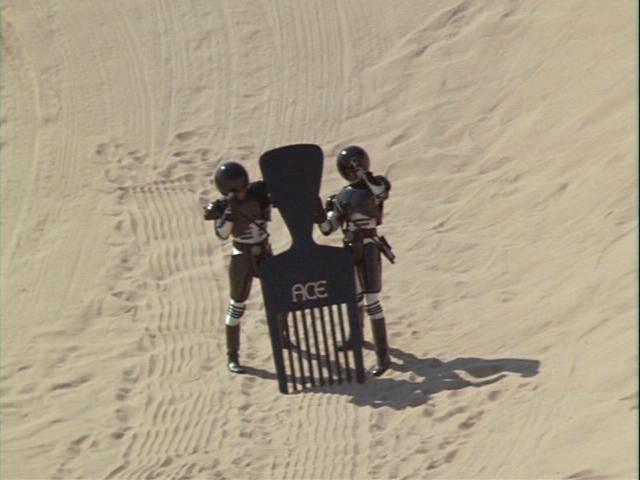 This wonderful happenstance occurred the other night while I was out at a bar with friends.  Due to the fact that much like beautiful women and rich men, foodies tend to hang out with other foodies, our conversation soon turned to edibles, and we were immersed in a round of culinary “fish stories.”  During this sybaritic discussion, a friend of mine began talking about a Dry Aged 48 Oz Porterhouse they had heard wonderful things about that is served at a restaurant in Fairfield, NJ by the name of Tierney’s CopperHouse located at 4 Little Falls Rd. After hearing my fellow foodie friend describe this colossal slab of meat with adjectives that I have only seen on bathroom stalls of bars of ill repute, there was absolutely no way I was not going to pay the CopperHouse a visit. 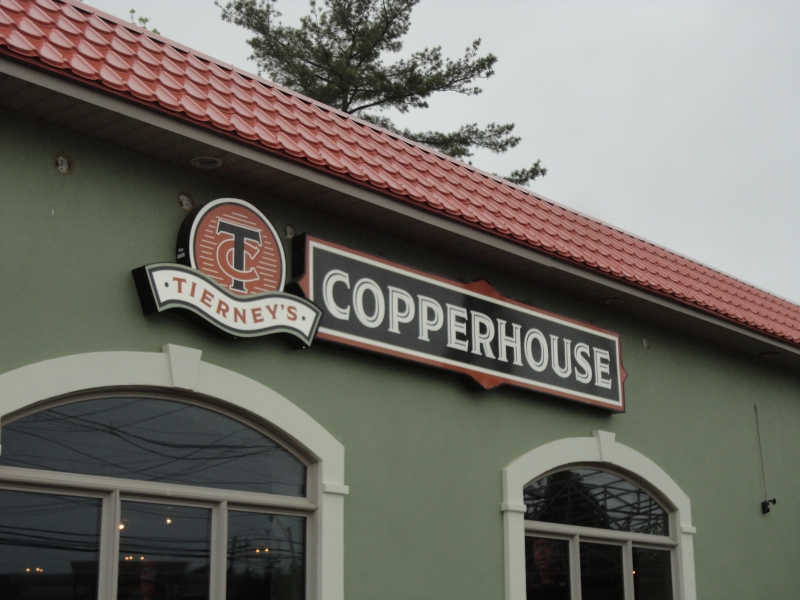 Considering, the Googles is the Watson to my Sherlock, I consulted it immediately.  While my 3G did my research for me, I found that the reason that Tierney’s CopperHouse was not on my radar was not because my radar lost its bleeps, sweeps, and creeps, but rather because Tierney’s CopperHouse just opened in April.  With that in mind, the fact that their fare was already being strewn about in epicurean blitzkriegs, like gourmet grenades, said something about this fledgling eatery.

As we approached the building, the first thing I noticed was that this was not a small establishment.  The expansive modern exterior looked quite alluring, even in the misty rain that decided to fall on us as we got out of our vehicle.  As we entered the restaurant, we were greeted at the door and escorted through the bar area, complete with a warm inviting brick fire place, into the gorgeous dining room.  Once seated, we were given our menus and we ordered our first round of drinks.  I was very pleased to see that Tierney’s CopperHouse offers a large selection of craft beers featuring some Cricket Hill selections, which are born and raised right in Fairfield, NJ.  This fact alone is worth getting off your couch and making your way to the Copperhouse, considering that Cricket Hill creates some of the finest beers in New Jersey, if not the country, and I am always overjoyed about the chance to drink a fresh draught out of a frosty mug. One great thing about fine dining in New Jersey, and just from the looks of this place I had a feeling I would be dining quite fine, is that the prices of beverages always seem to be much more reasonable than those over the river, and I don’t mean at Grandma’s house. 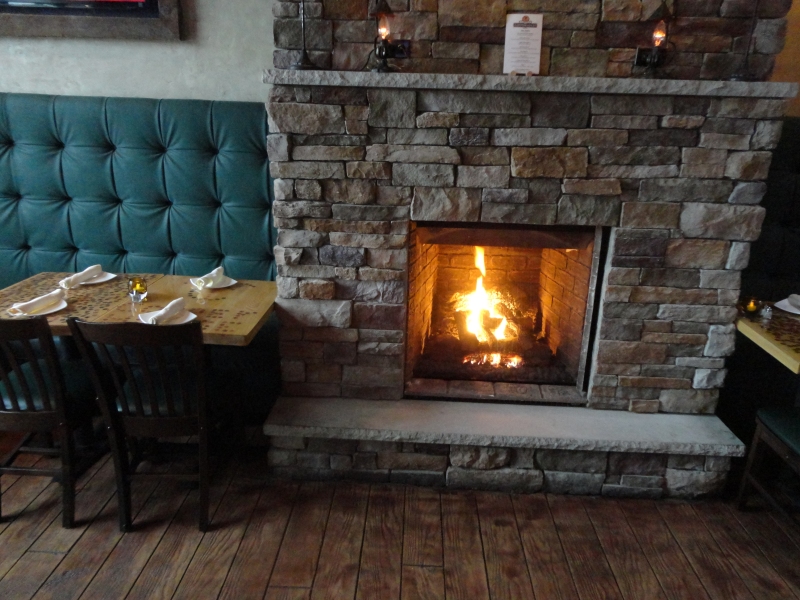 With our drink orders in, it was time we got down to the nitty-gritty, the most daunting task of any meal, ordering the main course.  I attempted to sway my partners in crime to assist me in devouring the TC Family Bedrock Steak, which weighs in at a formidable 64 Oz of meaty goodness, only because it would have been the largest steak I have ever ordered in my foodie career.  Alas, I was only able to convince one of my fellow patrons to join me on a gluttonous meaty adventure and therefore, we decided upon the aforementioned Dry Aged Porterhouse for two, which was accompanied with two sides of our choice, the grilled asparagus and Spinach Mushroom Quinoa, and rang up at $79.00.  Our better halves, that apparently did not want to eat damn near half a cow, opted for dishes that were slightly less excessive but sounded equally as appetizing, electing to order the Free Range Chicken described as an Amish free range half chicken paired with potatoes and asparagus for $19.00 and the TC Chicken Pot Pie described as free range chicken, carrots, Yukon gold potato, peas, corn, pearl onions, with puff pastry for a modest $14.00. 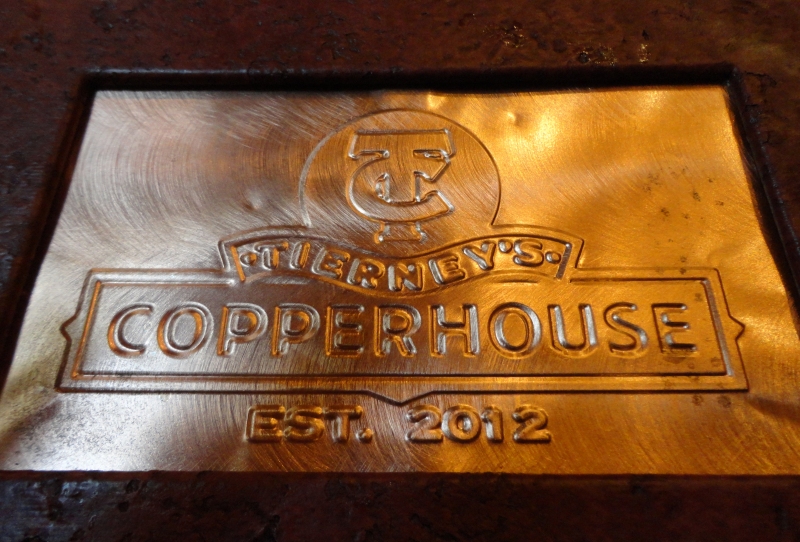 The anticipation of this Fred Flintstone sized steak, which was in my mind carved from the flank of a Brachiosaurus, was causing me to salivate like a Pavlovian test subject.  Each time the kitchen door swung open, I was distracted from our polite diner conversation, in hopes that the server that exited was carrying our savory feast.  Sooner rather than later, my hopes were realized and our table was adorned by a plate that was only matched by the beauty of my wonderful wife. (10 points for me!)  Not to say that the other food that was delivered to our table did not look eye-catching, but I mean, come on people, this was a 48 Oz. Steak I was staring at; it is like comparing other girls to Marilyn Monroe, it is just not fair, not fair at all.  I could barely contain myself through the picture taking phase and almost said the hell with it, and dug in, but I was a virtuous little food blogger, and waited until all the photos were snapped before digging into the pre-cut slices of pure happiness that graced my plate. 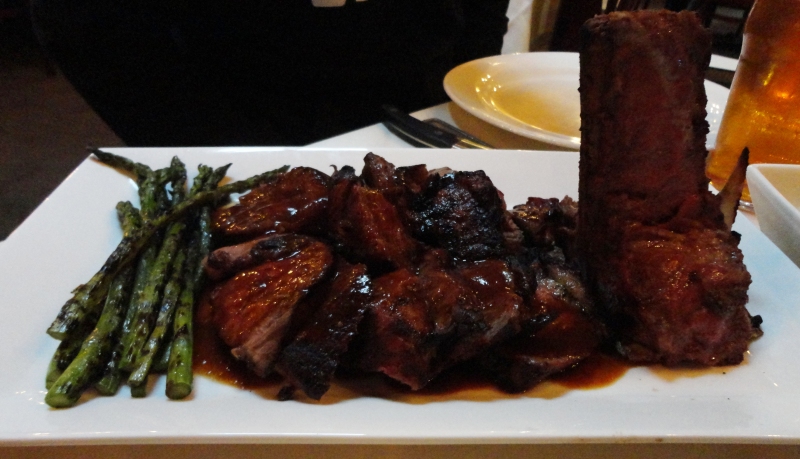 If the price that I mentioned above frightened you away from ordering this behemoth steak, I want you to know that this steak damn near forced me to reevaluate my frugal tendencies.  Every bite I took was packed with flavor and only made me want to have another delectable morsel.  For those that are not math majors, I alone, ate 24 Oz. of this meatastic meal, and I think I could have eaten 24oz more.  Combined with the side dishes this meal was well worth the price tag and was a feast fit for a king. 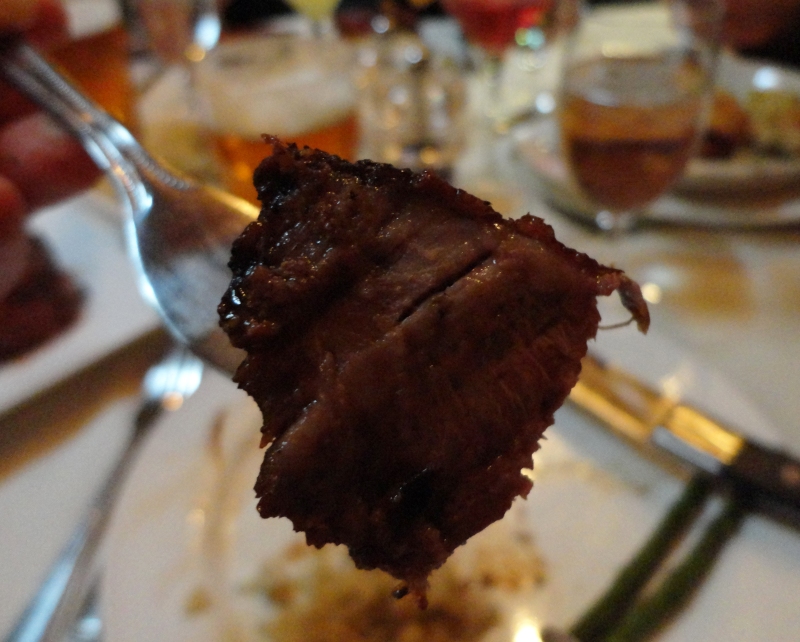 Even though, it was hard for me to stop partaking in this succulent beef barrage, I had to force myself away to try the other dishes that were ordered.  I was lucky enough to be dining with people that support my gastro gallivanting and they had no qualms about me eating a small portion of their meals to uphold the integrity of my writing. 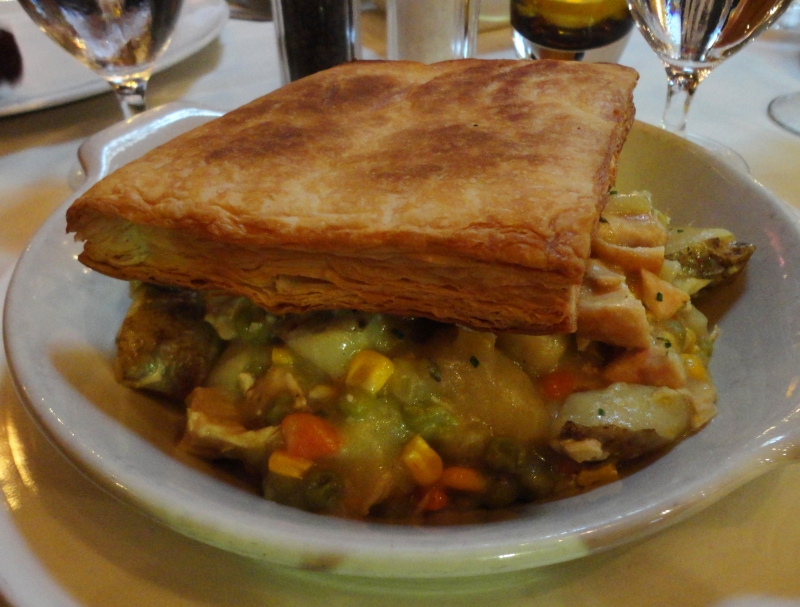 I tasted the TC Chicken Pot Pie first and it was delightful.   In my opinion, Chicken Pot Pie is an extremely tough dish to make because it must be perfectly seasoned and have the proper texture in order to really be a respectable dish when surrounded by other high end meals.  Executive Chef Jeff J. Orel has found that balance between comfortable and innovative, which is quite difficult mind you, and served us an amazing Pot Pie. 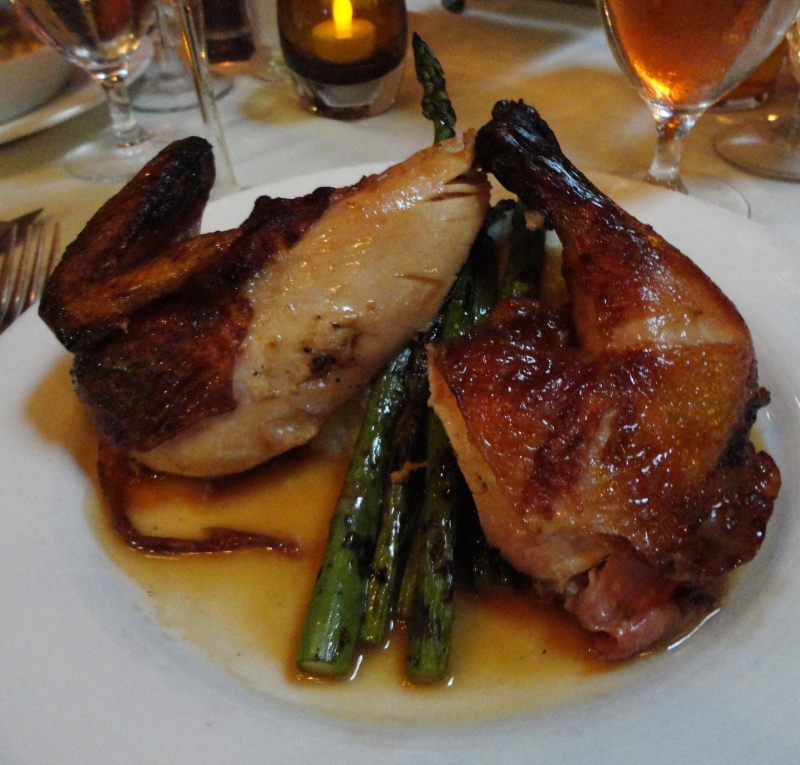 Next up was the Free Range Chicken that was served in its natural au jus.  This dish was not dry, yet still had a crispy flavorful skin.  I have a hard time accomplishing this task cooking one chicken for two people, so the fact that the Chef was able to pull this off while cooking 20 other meals and balancing a whole kitchen staff is a complement to his skill and professionalism. 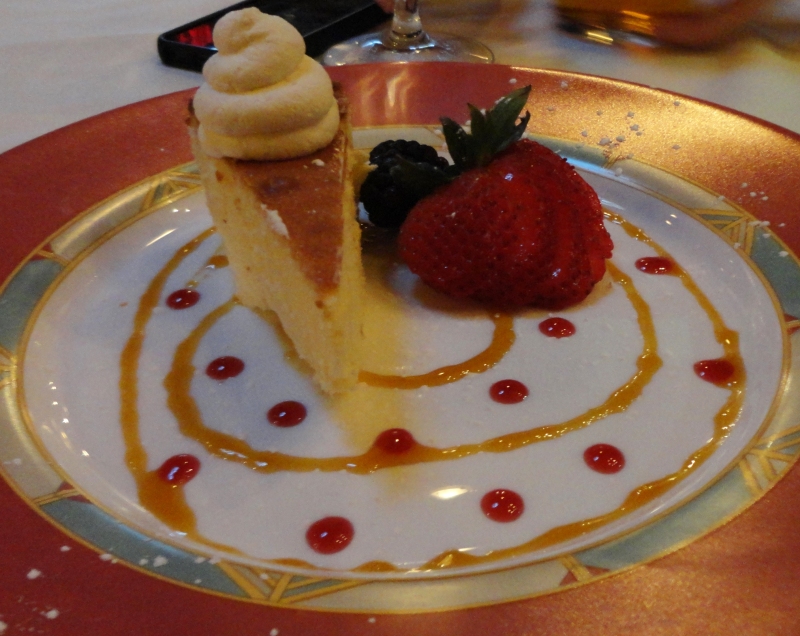 It may have been the alcohol talking or I could have been a bit meat drunk, but even though I had just eaten two days’ worth of calories in one sitting, I had a hankering for desert.  My tablemates agreed that a nice sweet ending to our dinner would be appreciated, and we decided to share two plates between the four of us.  The dessert we decided upon was a slice of cheesecake that literally melted in our mouths and a chocolate Ganache cake that was so decadent that sugar itself is jealous of it. 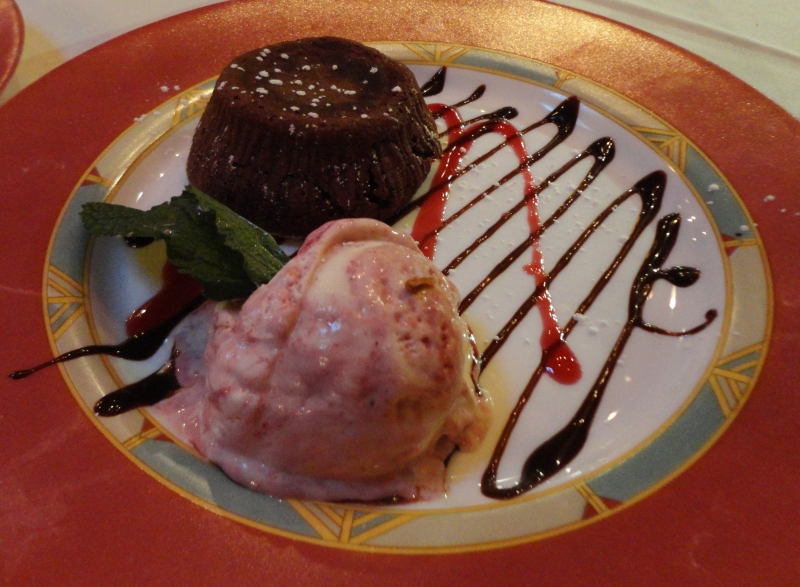 Tierney’s CopperHouse is a must visit eatery for any foodie in the area that is looking for a cold craft beer paired with a phenomenal meal in a faultless setting.  For those of you that were scared off by the prices of these meals, if you check the menu out on the CopperHouses’ website I assure you, you can find something that is in your price range that will be just as amazing.  There are some restaurants that I eat at that are forgettable, this is not one of those places, after one meal at Tierney’s, I could sense that they are passionate about food, and I will be returning again and again, although next time I plan on conquering the 64 Oz. Bedrock, whether my companions consent or not!